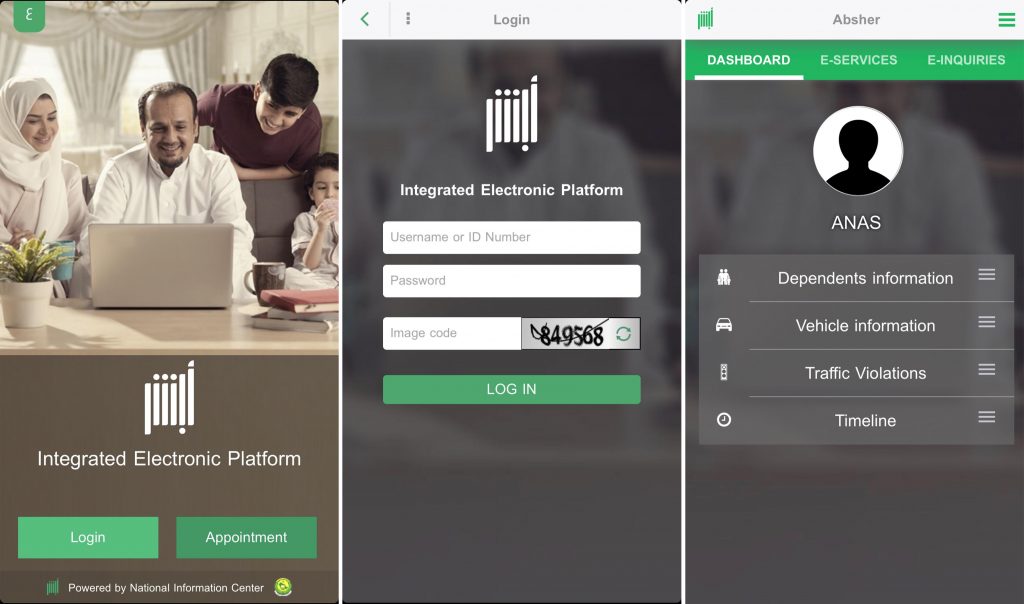 Saudi Arabia and women’s rights rarely feature in the same sentence for positive reasons, and it is no surprise. The country ranks 141st out of 144 in The Global Gender Gap Index, highlighting a deep-rooted culture of male dominance. Whilst some statistics suggest a gradual increase in gender equality over the years, the overall trend is bleak, with only Pakistan and war-torn Syria and Yemen scoring lower. The latest Saudi hot potato goes by the name of Absher.

Saudi Arabia’s government-run eServices app Absher has stirred controversy this year due to its hand in empowering the country’s male guardianship system. Absher, which roughly translates to “yes sir“, provides a range of useful governmental services but notably makes it possible for men to track and restrict the movements of women, including controlling where they can travel. In her Bloomberg article, Khawla Al-Kuraya wrote: “Out of the 160 services Absher provides, critics have singled out one“. Yes, they have⏤with good reason.

If a woman checks into an airport, the male guardian⏤or wali⏤receives a text to alert him to her movements and can withdraw her right to travel. This can have particularly dire consequences for women who seek to flee Saudi Arabia and fear being caught and killed by their family. At least 1,000 women try to flee Saudi Arabia each year, and Absher makes it easy to track and catch these women before they escape. Shahad al-Mohaimeed was 17 when she fled. “When we decide to leave,” she said, “we decide to put our lives on the line. Because if we don’t succeed, our families are going to kill us.”

However, Saudi men have been quick to defend the app, launching a viral campaign with the hashtag “#I_support_Absher.” The most common benefits praised include the elimination of paperwork and the ability to conduct governmental affairs remotely. The Google Play store and Apple’s app store are inundated with male support for the app, comprehensively drowning out alternative narratives. Reviews from Saudi men claim that Absher “makes my life easier” and is “the best governmental app I have ever used”.

There are undoubtedly benefits to Absher, which allows citizens to register vehicles and apply for visas at the touch of a button. However, it is difficult to ignore the potential and actual exploitation by Saudi men of women that are subject to the perils of the male guardianship system.

Absher is available to download on both the Google Play store and Apple’s app store, which has led to criticism that the tech giants are complicit in the Saudi regime. Both Google and Apple have been urged to remove Absher from their platforms, and in response to the backlash, both vowed to probe the app to determine whether it is in line with their policies.

Human Rights Watch and Amnesty International publicly expressed their concern, with the latter stating to The Washington Post: “The use of the Absher app to curtail the movement of women once again highlights the disturbing system of discrimination against women under the guardianship system and the need for genuine human rights reforms in the country, rather than just social and economic reforms.” In a letter to Google and Apple, Senator Jon Wyden said: “American companies should not enable or facilitate the Saudi government’s patriarchy,” calling for an end to the “abhorrent surveillance and control of women.”

However, despite the severe public criticism, both Google and Apple will continue to provide a platform for the controversial app. Google declined to remove Absher, claiming that it did not violate any terms of service. Apple is yet to comment. According to Rep. Speier, “The responses received so far from Apple and Google are deeply unsatisfactory.”

Absher is but a symptom of the underlying cultural problem in Saudi Arabia, that being its loyalty to the male guardianship system. The app has simply expedited administrative processes and ramped up the level of surveillance. The app handily cuts out the paperwork required by male guardians, meaning that they can “no longer use the excuse of bureaucracy“. Whilst this can facilitate travel for women, they are still at the mercy of the male guardian’s decision.

The underlying cultural problem is rooted in Saudi Arabian law. The law states that all women are required to have a guardian that has a final say on all official matters, including permission to apply for passports and driving licences, permission to seek a job, and even permission to undergo medical procedures. Male guardians are completely within their legal right to deny a woman any of these services, rendering women with little authority over their own lives.

The controversy surrounding Absher coexists with Saudi Arabia’s efforts to sell to the world a more modern and liberal version of itself, including a loosening of the guardianship system⏤Saudi Prince Mohammed bin Salman appears “eager to acknowledge that he wanted to bring about an end to these guardianship rules“. However, as the country boasts about its recent modernisation, Absher highlights how little has changed. Worse still, legislative change might be less impactful than anticipated. Whereas Western cultural movements drive social change long before the law eventually catches up, Saudi Arabia has proven itself to be stubborn to its own legislative changes.

Why is this? Sharia law is a key component to Islam and religious dogma is far harder to shift than mere social policy. Conservative Saudis that are opposed to recent liberal interpretations of Sharia may prefer to observe more traditional interpretations, meaning that those women who recognise Mohammed bin Salman’s looser interpretation of the Sharia dress code are protected by the law but still at liberty of conservative scorn and persecution. What’s more, the Saudi government have imprisoned and tortured the very women’s rights activists that campaigned for the legislative changes that they subsequently enacted.

In an article for Human Rights Watch, Elaine Pearson wrote: “This International Women’s Day, I think of these women currently detained in Saudi Arabia for their groundbreaking work on women’s rights, especially campaigning for the right for women to drive and for the abolition of the male guardianship system. They are among at least 10 women’s rights activists, as well as some male supporters, detained by authorities as part of a broader crackdown on dissent in Saudi Arabia.”

In the same article, Samah Hadid, Amnesty International’s Middle East Campaigns Director, said: “The charges against the activists are the latest example of the Saudi authorities abusing legislation and the justice system to silence peaceful activists and deter them from working on the human rights situation in the country. This trial is yet another stain on the Saudi authorities’ appalling human rights record, and shows how empty the government’s claims of reform really are.”

This is the context in which Absher lives. It is no wonder the app has stirred such controversy.

The lesser of two evils?

There is no doubt that Absher can be, and is, a useful tool for Saudi citizens. However, its propensity to empower the male guardianship system cannot be overlooked. Critics say that it “exacerbates the already repressive laws that govern how Saudi women live their lives.” As we have already discussed, Absher is essentially a twenty-first-century manifestation of a deeper cultural problem. The male guardianship system and Saudi Arabia’s reluctance to evolve culturally is the problem.

Absher gives male guardians the power to waive all travel restrictions or fully prohibit travel. Advocates will emphasize the former, but they are too stubborn to acknowledge that the problem lies in the app’s reinforcement of Saudi’s institutionalized gender power balance. It is the women subject to the male guardianship system that are suffering true injustice, not the male guardians that are reluctant to queue or fill out paperwork to permit their wives temporary access to rights that Saudi men hold as a birthright. Absher may expedite the process, but the imbalance remains for all to see.

To put Absher and Saudi Arabia’s deeper cultural issues into international context, the UK’s criminalization of controlling or coercive behaviour in an intimate or family relationship, as per Section 76 of the Serious Crime Act 2015, has been broadened in a 2017 review to offer more protection in an area of law where women are the principal victims. The thought of such legislation being enacted in Saudi Arabia is frankly laughable.

Should Absher be banned?

In a time rife with deplatforming and safe spaces⏤overlooking the counterproductive nature of these practices for a moment⏤it is surprising that such a toxic app is being given the time of day whilst other individuals and organisations are silenced without as much as a second thought. Amnesty International and Human Rights Watch have accused Apple and Google of helping “enforce gender apartheid” by hosting the app. However, campaigners have been hamstrung by the belief that banning Absher could cause further harm to women.

There is a case to be made against throwing the baby out with the bathwater. Absher helps citizens “break through the bureaucratic red tape of governmental services” and an outright ban may be unhelpful. Advocates, including Khawla Al-Kuraya, claim that Absher “actually helps” Saudi women. If you count helping women more easily navigate within their agonizingly restricted legal boundaries, whilst providing unlimited control-ability at the touch of a button for male guardians, then Al-Kuraya is correct.

In her article for The Guardian, Arwa Mahdawi describes Absher as “awful” but believes that “having it removed will further restrict women”. Thus, given its propensity to empower the male guardianship system in its current form, why not boycott only the exploitative features? Why not keep the bureaucratic functions like license renewal but remove the functions that let men monitor and control women?

There are three issues with this argument. Firstly, it implies that Saudi men would happily surrender their newfound surveillance capabilities. Secondly, the “wife-tracking” features may make male guardians more likely to grant permissions given the elimination of “bureaucratic red tape”. Most importantly, these “wife-tracking” functions are merely manifestations of male guardianship laws, and women will be subject to these laws whether or not they feature on Absher. The key issue lies in Saudi law and culture that underpins the app’s utility. As Al-Kuraya herself wrote, “the laws are restrictive, with or without Absher.”

Until the laws around male guardianship change dramatically⏤or are abolished⏤then Saudi women will continue to be oppressed and controlled, irrespective of Absher.