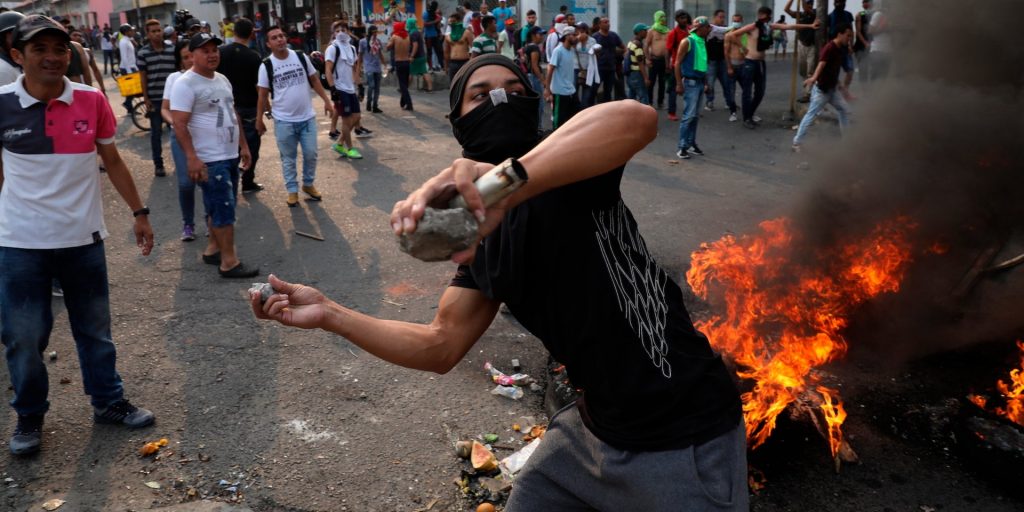 Imperialism, socialism, coups, dictatorship, and democracy. Food shortages, inflation, violence, death—the situation in Venezuela has been in and out of the news as the nation’s economic and political crisis keeps evolving.

After opposition leader Juan Guaidó led a failed push to oust President Nicolás Maduro, no one is sure what will happen next. Indeed, with the speed of the news cycle, many have probably lost track of what exactly is going on in the country. In light of this, it is worth looking back on how Venezuela got in this situation.

It all goes back to Hugo Chávez, the charismatically eccentric left-wing populist who was elected President of Venezuela in 1998. In that role, he declared a “Bolivarian Revolution,” after Latin-American independence leader Simón Bolívar, with the goal of implementing “socialism of the twenty-first century.”

He won the support of impoverished and working-class Venezuelans by nationalizing industry, redistributing wealth, and setting up programs like universal healthcare. Chávez’s defenders, like the Center for Economic and Policy Research, credit him with increasing economic growth, reducing poverty and unemployment, and expanding education, among other achievements.

However, Chávez also ruled Venezuela like a dictator. He packed the courts and the state-owned oil company PDVSA with his loyalists. He censored journalists who disagreed with him. He organized civilian militias to intimidate opponents.

Unsurprisingly, this conduct attracted criticism. Chávez’s fiercest opponents were business elites and others who had to lose from his left-wing policies. But politically-minded citizens from across the political spectrum also took issue with his authoritarian ways.

In 2002, a coup removed Chávez from power, but he managed to regain control after 48 hours. It was later revealed that the Bush administration, if nothing else, had prior knowledge of the coup. The event portended a decade of hostile relations between Chávez and what he denounced as American imperialism.

The remainder of his rule had its ups and downs, but things were mostly stable. His social programs were expensive, but he paid for them using PDVSA oil. The system was rife with corruption, but it worked for as long as the oil market boomed.

Needless to say, the good times did not last forever. After Chávez died in 2013, his vice president Nicolás Maduro won the presidency by a margin of 1.49% in a disputed election. It only went downhill from there.

As oil prices fell, national debt grew and inflation exploded. The IMF estimates a 2019 inflation rate of ten million percent. Under Maduro, the country faced shortages of food and medicine. Poverty reached 90 percent. Millions fled to Colombia and other countries. Any progress that took place under Chávez had vanished.

In the US, commentators debate whether Venezuela’s problems are the fault of socialism or whether they are just a nonideological example of bad governance. This dispute has no satisfying answer, but it should be noted that although Chávez positioned himself on the far left, he fell short of socialist ideals like nationalizing the means of production. In 2010, Fox News itself reported on the booming private sector under Chávez.

Regardless of the cause, Venezuela was in crisis by 2018. The idea that Maduro could maintain popular support was laughable. When he won that year’s presidential election in a landslide amid allegations of fraud, Western nations were quick to declare the results illegitimate. Meanwhile, the opposition decided that the time for action had come.

The Venezuelan Constitution, written under Chávez, is not exactly clear on how to handle an illegitimate president. But when the presidency is vacant, it does say that the President of the National Assembly–the equivalent of Speaker of the House—becomes the interim president. Thus, the holder of that position, little-known centrist Juan Guaidó, took up the mantle on January 23, 2019.

He quickly received recognition from the US and a majority of Latin America and European countries. Most of them called for a peaceful negotiations and new elections, but the Trump administration did not rule out military action.

Regardless, Maduro refused to budge. He had control of government apparatuses and the support of his ideological allies and trading partners, including Cuba, Russia, China, Turkey, and Iran. As long as he could sit comfortably in the presidential palace of Miraflores, he intended to remain there.

From there, Venezuela entered a cold civil war. Two different men claimed to be the legitimate president. Violent clashes occurred, and events like a nationwide blackout raised tensions, but for months the situation was eerily stable.

This changed on April 30. Guaidó appeared in a video alongside military officers and opposition politician Leopold López, who was imprisoned in 2014 but had apparently just been freed from house arrest by military defectors.

In the video, Guaidó called for an uprising in the capital of Caracas with the goal of overthrowing Maduro. Clashes continued on May 1. Known in Venezuela as El Día del Trabajador (The Day of the Worker), May Day should have been a high point for the socialist government. But the street battles ended in stalemate, demonstrating Maduro’s failure to cultivate the same amount of support as Chávez.

However, this is not a popularity contest. Guaidó’s goal is to force the military into a position where it must overthrow Maduro for the good of the country. While some officers have gone to his side, however, the bulk of the leadership stands with the government.

As of April 2, the opposition has failed to make much progress, but Guaidó is not standing down. As reports come of events such as military vehicles running into anti-Maduro protestors, it seems that the situation will only escalate.

What does the US have to do with it?

According to Maduro, Venezuela’s woes are all the fault of a US plot. While this is an obvious ploy to evade his share of the blame, such a claim is not without merit. The US has a long history of interfering with Latin American countries’ politics, often to the detriment of the people living there.

Among other actions, the Trump administration has ramped up sanctions with the goal of destabilizing the Maduro regime. The full extent of the US’s behind-the-scenes activities is as of yet unknown.

The White House’s strong support for Guaidó allegedly comes from a love of democracy. But this explanation overstates the benevolence of the US government. President Trump engages in friendly negotiations with Kim Jong-un, who is perhaps the most brutal dictator on the face of the Earth. Why is he so outraged by a second-rate strongman like Maduro?

Issues in international politics have layers to them, and Venezuela is no different. In 2017, the Center for Strategic and International Studies listed reasons that the US should involve itself in Venezuela, most of them pragmatic. Among them, the presence of a hostile power along the Caribbean endangers US strategic interests. In addition, the economic crisis and resulting emigration have only added to regional instability.

And, of course, Venezuela’s oil wealth cannot be ignored. One could have dismissed this as a conspiracy theory until National Security Advisor John Bolton admitted in a Fox Business interview that opportunities for US oil companies are a consideration in the administration’s actions.

Other countries are also imposing themselves on the region, but none of them have the same military strength and willingness to act as the US. The National Interest described Russian troops in Venezuela as “a joke.” The situation is America’s to shape, but with the events of Vietnam and Iraq in mind, it is important to avoid rash action.

Neither Maduro, Guaidó, nor any of their supporters are likely to step down any time soon. If the course does not change, Venezuela is at risk of falling into further civil strife.

The Trump administration is openly considering military action, but the fantasy of the Venezuelan people welcoming US troops as liberators is unlikely to come to pass.

Even the archetype of successful US intervention in Latin America, the 1989 removal of Panamanian dictator Manuel Noriega, sparked massive debate over civilian death tolls that ranged somewhere between the hundreds and thousands.

Maduro will be harder to remove than Noriega. Popular opinion is difficult to gauge in a country in crisis, but a poll conducted in 2018 suggests that a majority of Venezuelans support Maduro’s ouster, but also oppose foreign military intervention.

At this point, some Venezuelans would indeed welcome US troops kicking Maduro out of Miraflores. But many others would fight to the death to prevent such an event.

Maduro maintains Chávez’s network of violent pro-government militias. Even in the best case scenario of a peaceful democratic transition, at least some of them will take to guerrilla warfare in the mountains. In the worst case scenario, they could launch a brutal civil war.

Of course, a surprise is still possible. In a CNN interview on May 1, Secretary of State Mike Pompeo claimed that Maduro briefly planned to abscond his office and flee to Cuba. So long as his personal safety is assured, the president may be willing to leave behind the mess that he created.

Meanwhile, The Economist envisions a scenario where Guaidó wins the support of the military and low-ranking government officials to oust Maduro and form a unity government. Of course, this is much easier said than done.

At this point, nothing is impossible, but no one should hold their breath for an easy solution to emerge in Venezuela. Whether Maduro or Guaidó comes out on top, the end of the power struggle is only the beginning of a much longer journey to rebuild the country’s economy and democratic institutions.

Liam Glen is studying Political Science with minors in Sustainability Studies and Conflict Management at UNC Chapel Hill. His hobbies include reading, writing, and making obscure references to subjects including but not limited to American presidential history, political philosophy, and the Silmarillion.