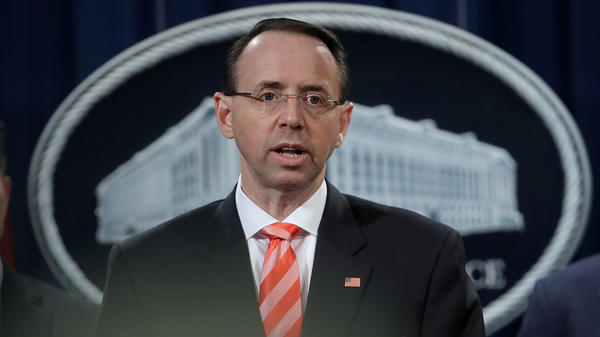 Despite his turbulent relationship with President Trump, Rosenstein thanked and praised the President. “As I submit my resignation effective on May 11, I am grateful to you for the opportunity to serve; for the courtesy and humor you often display in our personal conversations; and for the goals you set in your inaugural address: patriotism, unity, safety, education, and prosperity, because “a nation exists to serve its citizens,”” Rosenstein wrote.

Rosenstein’s legacy is ambiguous. The former US Attorney for Maryland experienced wild swings in his public perception during his time as Deputy AG.

Early in his tenure, Rosenstein drafted a memo advocating for the dismissal of former FBI Director James Comey. The memo discussed Comey’s handling of the Hillary Clinton inquiry and ultimately provided the basis for Comey’s firing. However, Rosenstein was criticized for this move as he effectively enabled Comey’s dismissal amid the FBI’s investigation into the Trump campaign’s ties with Russia.

However, Rosenstein appointed Mueller as a special counsel to continue the investigation. Rosenstein oversaw the special counsel’s inquiry; AG Jeff Sessions recused himself due to his role as a Trump campaign adviser.

Rosenstein has frequently drawn President Trump’s ire due to his role supervising Mueller’s team. CNN reports that President Trump made comments like “let’s fire him, let’s get rid of him.” Still, Rosenstein refrained from suppressing the special counsel’s investigation.

Rosenstein’s job was threatened last fall when the New York Times revealed that he suggested wearing a wire into meetings with the President. It could have served as an excuse for President Trump to fire him–but Rosenstein retained his position and saw out the Mueller investigation.

Rosenstein backed current AG William Barr’s conclusion that the special counsel’s report does not provide sufficient evidence to bring obstruction of justice charges. However, Mueller’s report intentionally avoids exonerating the President. In fact, it has come to light that Mueller wrote a letter to Barr objecting to his characterization of the special counsel’s findings. In particular, Mueller disapproved of Barr’s assertion that the investigation cleared Trump on possible obstruction of justice.

While the ultimate implications of Mueller’s investigation are still to be seen, Rosenstein’s experience as deputy AG has challenged his reputation as a straight-shooting Republican lawyer. President Trump has nominated Jeffrey Rosen, the current deputy transportation secretary, to replace Rosenstein. Rosen will likely be confirmed this month.