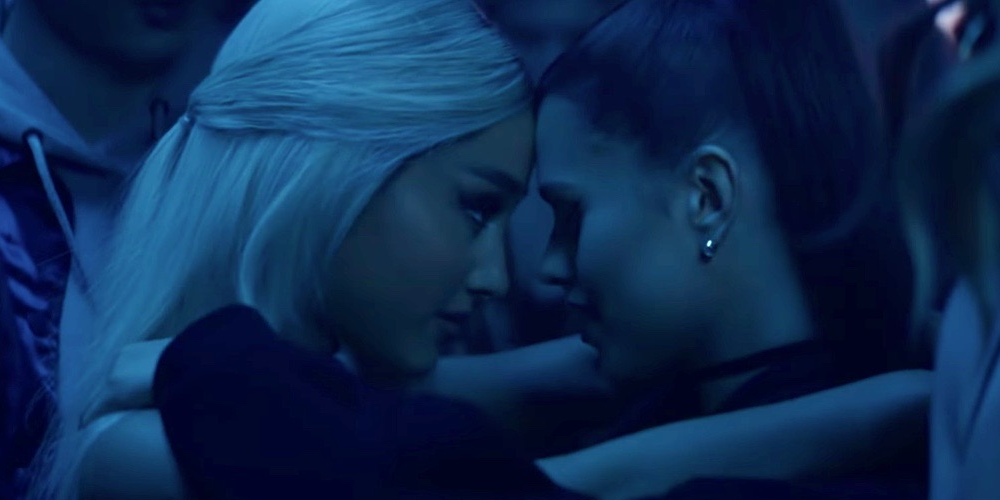 At the beginning of Ariana Grande’s nostalgic “thank u, next” music video, several celebrities and friends of the pop singer confess fan theories in classic Mean Girls tradition. Eventually, Troye Sivan’s talking head appears, telling the viewer “I heard she’s a lesbian and dating some chick called Aubrey… it’s sick.” What was meant to be a funny dig to fans about a misunderstood lyric sparked some controversy, as members of Grande’s fanbase speculated that she had used the lyric to come out as bisexual.

Following the release of Victoria Monet’s “Monopoly”, which features Ariana Grande, the vocalists sing “I like women and men”, which revealed a much bigger controversy. Both fans and critics alike have speculated that these hints to Grande’s sexuality are queerbaiting – a tactic by which people use queer identities for profit and popularity.

Essentially, writers/musicians/filmmakers/artists will allude to or drop hints about someone’s queer sexuality without ever actually confirming it or showing it explicitly. And most of the time it’s done to attract a queer audience or just be edgy.

While it’s not yet clear whether Grande is using the rumors to intentionally mislead her fanbase, it’s important to note that queerbaiting is nothing new. And, as American society is opening up to the realities of queer lives and identities, this tactic remains outdated and cruel.

Musicians have been alluding to same sex relationships in their music for years. However, in the last few years, there has been an enormous amount of controversy surrounding queerbaiting in several forms: misleading lyrics, public performances, and the ease by which some pop stars refuse to engage in “labels”.

When Rita Ora released her 2018 star-studded “Girls”, featuring Bebe Rexha, Cardi B, and Charli XCX, she was met with controversy. While Ora revealed to Billboard that she used the song to come out as bisexual, some fans took issue with the way in which the song portrayed relationships between women. Both pop singer Hayley Kiyoko and Kehlani were publicly offended by some of the lyrics, claiming that they felt it was harmful and perpetuated stereotypes about queer women.

Queerbaiting has existed in pop music for decades. From Britney Spears and Madonna kissing on the VMA stage in 2003 to Katy Perry kickstarting her career with “I Kissed A Girl”, pop stars are not strangers to the notion that appealing to queer fans sells.

What’s particularly harmful, then, is that these people are not looking to shine a light on issues facing queer people. They are using a marginalized identity, in any small way, to profit off of. Even when unintentional, the tactic is problematic, especially when it comes to artists whose fanbase is largely composed of young, queer people.

This concept is not unique to the music industry. While generally open to the idea of representing queer identities and relationships on screen, showrunners, writers, and producers on all platforms have been accused of queerbaiting.

One of the most popular examples of this is from BBC’s Sherlock adaptation. For the entire run of the show, viewers believed that characters Sherlock Holmes and John Watson were going to be confirmed as a couple. When creator Steven Moffat spoke about the importance of subtle LGBT representation at a Nerd HQ panel in 2016, many fans were excited to see how this would play out on the show. Moffat later recanted his statement, prompting an uproar of fans across social media platforms like Tumblr and Twitter, who accused the creator and his writing staff of queerbaiting.

Essentially, by hinting that his characters may be gay, he was able to tap into a market of television viewers who would watch each episode over and over again, waiting for a moment that was never going to come. Using a combination of these public statements, vague illusions in promotional materials, and subtext between the two characters, Moffat helped to create an enormous community of queer fans across social media.

While certainly not the worst part of pop culture in 2019, queerbaiting is harmful because it preys on the lack of queer representation in all forms of entertainment media and uses these marginalized identities for profit.

A trope that often coincides with that of queerbaiting in television is the Bury Your Gays trope: in which openly queer or supposedly queer characters are killed off of a show (often in a brutal way) and treated as if they are disposable.

One of the most alarming examples of this comes from The CW’s The 100, when two characters are revealed to be queer after fans speculated for some time on social media. The two characters, Lexa and Clarke, shared an intimate scene on screen. By the end of the episode, Lexa was killed by a bullet meant for someone else. The queer internet exploded with accusations, helping to solidify the trope.

While not queerbaiting, this trope allows showrunners to profit off of queer identities without having to represent them realistically or challenge misguided, transphobic or homophobic notions about the lives and relationships of LGBTQ+ people.

In an age where popular culture is increasingly diverse and inclusive of all identities, why is queerbaiting accepted as a form of representation?

While it makes sense that some queer people across the internet are excited about any form of gay content that comes from their favorite shows or musicians, it’s upsetting to know that there is no reason for these people to hide their identities or forego labels, especially when they are seen as role models for adolescents. Sexuality is fluid, but it is also a way in which people are marginalized and oppressed for something they cannot and should not change about themselves. There is no reason to take part in or consume culture that uses queerbaiting to gain an audience or make a profit.

As an open queer woman, my advice to those seeking role models and artists with a shared identity: look for people who are open, unapologetic, and proud of who they are and who they love.