The startup world has allowed the flourish of so many fantastic ideas (the Pet Rock arguably doesn’t belong on this list). Likewise, it’s also birthed some weird, seemingly useless ideas. Either way, it’s seriously no joke now that startups have changed the business landscape. It’s possible to have an entrepreneurial idea that turns into a corporate money machine or at least a lucrative and sustainable business. Isn’t that the best kind of success you could ask for?

Well, unless you’ve got a “unicorn” idea, a company that worked its way from the bottom to the tippy top (Like Facebook or Amazon), then you’ve got to have modest goals. That’s just the predicament though. How does one even know if they have the next billion dollar idea? It’s certainly not a unicorn until it is one.

Generally, in the realm of startups, the idea is to solve a unique problem and start with one main focus. Seed money for tech in the Northeast is notoriously small. The median startup seed is $2.2M. That’s a generous amount of money that could form a small team that launches a simple, clean product with a very specific feature or set of features. I like to think of Dave, one of those in the advance cash app trend that really took off and ended up getting $13 million in funding.

This is what I have learned working at a startup: there are three key tickets to success: reasonable funding expectations, a focused, non-nebulous concept, and a talented and clever team of very collaborative individuals. That’s where this story begins and ends. I’ll keep this anonymous out of respect for the company I worked for, but we’ll go in chronological order for this journey.

Starting up something new

It was a frigid January day. I just got back from California for a Christmas visit and was coming down with the flu. I also had a job interview for a local startup operating in Philadelphia. So, I ventured my way across town in the cold.

I met two men who were in charge of the whole operation. They were getting a large chunk of funding from a real estate contractor turned tech investor. The interview was kind of goofy; it was clearly a pretty gritty effort but I saw solid, redemptive concepts in the idea as it was presented. I figured this was an internship for school., but I pleased to find out it was a paid job and counted for credits. Sold. I was on the way to kill two birds with one stone. They decided to hire me as a creative, which eventually became a role as a user experience and user interface designer. I define a lot of the role as “product development” but we’ll get to that later.

The work of the internship was pretty typical at first: taking notes, transcription, and research. At first, it was unclear what goal I was working toward. There was a pricey proof of concept, but no forward movement toward a goal. It was surprising between myself and the other creative brought on board along with me that our boss wasn’t familiar with the processes of making a website and app. Coming in from outside of the industry, he seemed aloof in the tech business. He had a crude understanding of the process; designers and developers, and they have to work together.

A good start, but it was lacking. My coworker and I developed a plan that was simple; design wireframes and prototypes to be handed off to developers (which is, simply put, something called an “agile development workflow”). We both had some experience in the practice, so we were confident in our abilities as designers beyond just graphic designers. So, that’s how we became UX/UI designers.

I couldn’t get over my boss’ antics at hindering productivity. Everyone could be at work on their daily tasks when out of nowhere—bam—we’d be lathered in a two-hour long conversation that was chock-full of misunderstandings, plagiarism, obscenities, and just bad ideas. Intense but it was always a net loss of time and muddied the goal of our tasks.

The ideas were always fantastical; the cacophonous fodder flew into my ears as grandiose dreams of success. They were always hearkening to the achievements of tech giants. One of our go-to counterarguments was that “Amazon didn’t become Amazon overnight.” To which he forced an ambiguous “yes, but, in the future” as a way of saying “this won’t go away.”

I’m forced to be vague as to not divulge proprietary information, but his endeavors were endless. Desires to be twenty apps in one, solve every problem a person ever has in their day-to-day life, and get an absurd amount of money to do it. My goal: mitigate the bad, foster the good, and create a product that was simple, clean, and had a good grasp on a small number of features. My efforts were yet to be thwarted completely. The key word being yet.

There are some humorous stories through the whole thing. There are also some revealing stories that give a glimpse into how tech startups exemplify the amount of superfluous money that has seeped outside the bounds of successful companies to dreamers and passion projects. In part two, I’ll talk about my bizarre day-to-day at the company, and tell some stories about my boss’ wild and problematic antics and where the company is now. 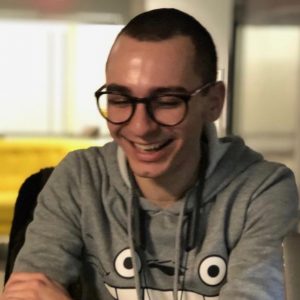 Digital minimalism: how and why you should try it, part two

Digital minimalism: how and why you should try it, part one

Why multitasking is a bug⏤not a feature

Revisiting Apple AirPods, a landmark in the future of smart tech