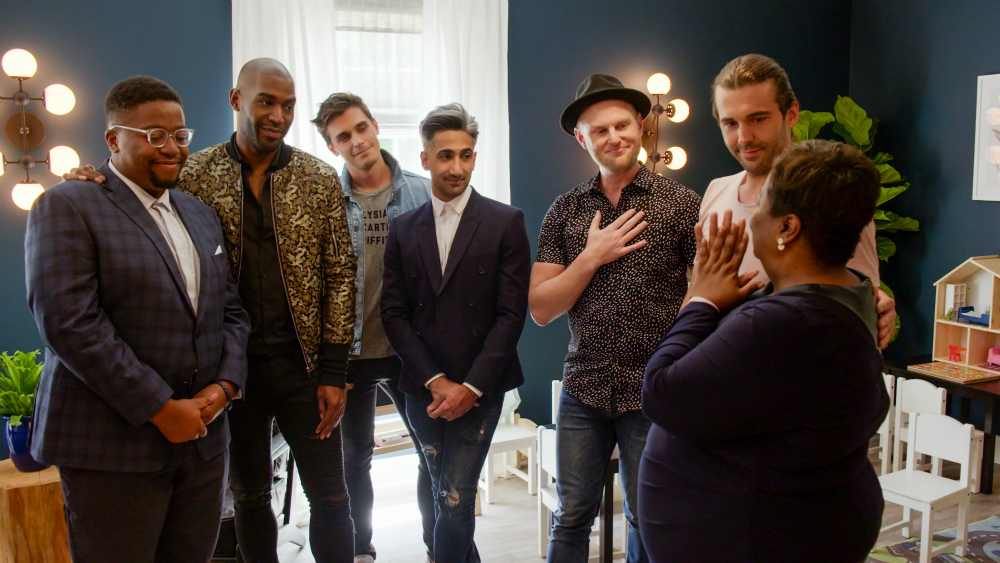 It seems like Queer Eye had become a phenomena overnight. It was 2003 all over again. It’s up to gay men, once again, to show straight men how to not be a slob. But only kind of. Because the show, while good-nature’d, still misses the mark.

Queer Eye has largely kept the same premise since its original Bravo premiere in the George Bush era. Five gay men, who specialize in “food and wine,” grooming, design, fashion, and culture respectively, provide a little TLC unto those in need of a pick me up (for some reason “and wine” has been a part of the food connoisseur’s title in both the original and the reboot). It’s a “Cat in the Hat” type situation. They show up, teach a little lesson on how to be cool, cleanup, and leave without a trace.

Jokes aside, the show has, now twice over, brought a lot of important LGBTQ+ representation to the table. For some people, this is and was the only type of gay, male representation in their life. The show has also aimed at representing many intersectional identities, but in doing so, has actually faced some controversy. That’s where we’re going to dig in a bit today.

A little back story…

As mentioned earlier, Queer Eye was a huge phenomenon when it premiered in 2003. By the middle of its first season, the show had 3.34 million viewers watching. The cast was a quirky, exciting group—their eccentric style captured the era. At first, the show was entirely aimed at giving straight men makeovers under the title, Queer Eye for the Straight Guy, until it was later shortened to “broaden the scope.” This became more like the Queer Eye we know today: the brand of reality TV show that favors touching, intimate moments that leave the viewer clutching their shirt collar.

However, culture has changed a lot, and that’s why the role of the “culture” aficionado has changed from relationship and interpersonal coach Jai (of the original show) to Karamo’s star-studded endeavor at breaking down walls and spreading inclusivity and acceptance. Opinions out there claim that the show used to be subtly racist in the way the cast interacted with people of color. And beyond that, the show struggles to break down stereotypes and instead perpetuates them.

No matter how you flip the script, the show comes up short of its goal to normalize queer people in every day life. One of the show’s biggest controversies was an episode about Skyler Jay, a trans man, in which the distance between some of the cast and Skyler was obvious. Skylar tells a reporter in an interview for Variety, that food guru Antoni said, “You’re the first trans person I’ve met” to which Skyler replied “that you know of.”

The show boasts itself as an effort for gay men to shepherd straight men, because there are just some things straight men can’t learn for themselves. It enables straight men to feel as though they don’t necessarily need to clean, organize, style, or cook. In terms of stereotypes, it doesn’t help anyone—not women, straight men, or gay men—to have a more complex understanding of identity in that sense. In fact, masculinity and femininity are so caught up in these actions that my guy friends always comment on the cleanliness of my home when they come over, remarked by my meticulousness. Not to mention, there are arguments that the Queer Eye cast’s perception of what is “clean” and “acceptable” are kind of classist.

Netflix is riding the wave

Case in point, the show is really popular. Netflix is pumping out episodes. Season 3 premiered on March 15th, just over a year after its first season premiered. There’s also a special set to premiere sometime this year. Queer Eye: We’re in Japan! will take the show to, surprise, Japan, and is sure to be a clash of culture that viewers will tune into.

Regardless, Queer Eye should work harder to break down the stereotypical dynamic that its predecessor set up.