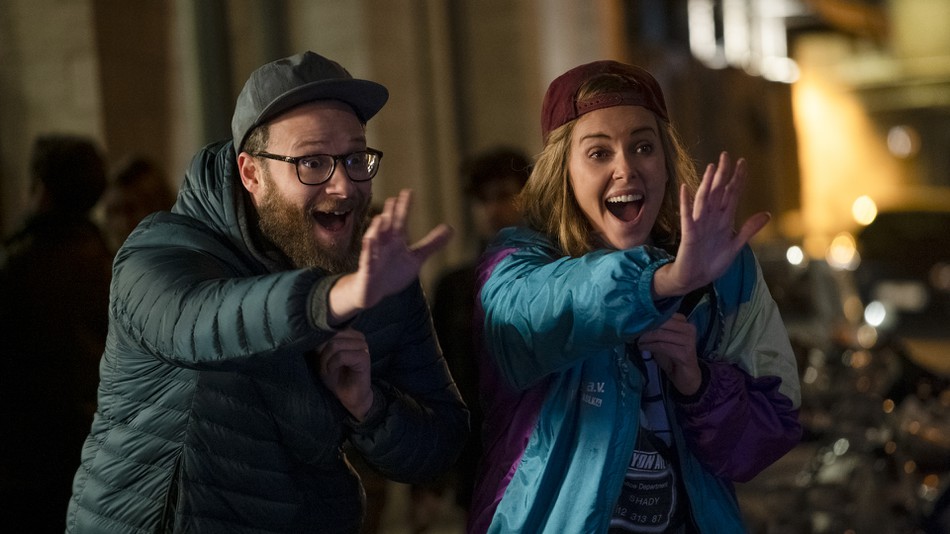 From director Jonathan Levine comes Long Shot, a solid rom-com that surprises and thrives due to the chemistry of its well-matched leads and subversion of genre tropes, for the most part.

Charlize Theron has previously flexed her comedic muscles but proves to be a revelation here as Charlotte Field, a Secretary of State with her eyes on the presidency. When she runs into carefree journalist Fred Flarsky, played by Seth Rogen, she hires him as her speechwriter despite her team’s misgivings.

The Oscar-winning actress’ performance is a notable departure from what we have come to expect but she enthusiastically takes on the challenge, discovering a fine balance between drama and humor. During the more intimate moments—which smartly aid the film’s consideration of public perception and how women in positions of power must present themselves—she displays a sweetness and vulnerability, careful so it never takes away from her strength in character. Likewise, when it’s time to muster some chuckles, she more than delivers her fair share, fantastically demonstrating her flexibility and range as an actress.

Seth Rogen, for my money, gives his strongest performance to date. His brand of comedy is not to everyone’s taste, and it is no doubt peppered throughout Long Shot—but without the screenplay’s pen in his hand, the vulgarity and crass is restrained and restricted to just a handful of moments and they work stronger as part of the whole. He’s clearly not quite as deft in handling the weightier themes as Theron but the tender moments are still sold with spirit.

The duo’s chemistry is scintillating and they form a genuinely authentic relationship, no matter how perplexing it may appear on the surface. Shared scenes are frequent highlights and the credits are a particular joy.

Long Shot’s supporting performers are a mixed bag however. June Diane Raphael and Ravi Patel both register humorous performances and form a compelling dynamic as Field’s campaign team, responsible for some terrific one-liners and character interplay. On the other hand though, O’Shea Jackson Jr’s adlibbing is rather grating and Alexander Skarsgård could be cut entirely while barely affecting the narrative at all. Andy Serkis absolutely commits however, and we’ll leave it at that.

Consistent laughs and a political edge

Penned by Dan Sterling and Liz Hannah, Long Shot’s screenplay deserves to be commended for its consistent laughs and enjoyable set pieces – as well as some raunchiness for good measure. With well-written and complex characters, and rarely going a few minutes without dropping a hearty chuckle, it is a crowd-pleasing affair that will win audiences over – particularly following a spate of lesser genre entities. Backed by Levine’s strong direction and solid editing, it’s technically well-polished and packed with personality making it very easy to like.

While many other gender-flipped comedies of recent years (romantically inclined or otherwise) have lazily taken its main conceit and failed to mine it for appropriate social commentary, Long Shot wants to do more; it isn’t based on anything per se but proudly wears its influences on its sleeves, inverting the setup of the oft-referenced classics Pretty Woman and Notting Hill.

Interwoven throughout the comedy and the courtship is smart and sharp discussions on gender roles and political bargaining. The effort is refreshingly topical but never overwhelming – until one scene between Rogen and Jackson Jr towards the tail-end which pushes the political discourse clumsily and unnecessarily. The point it attempts to make is no doubt profound but with little build up or arc, suddenly thrust upon you instead, it misses the landing and stands out for the wrong reasons.

Long Shot bends to genre tropes with the end in sight, frustratingly adhering to the formula after so impressively remaining on the edge in its final act. Furthermore, the flow of the narrative and tone isn’t always well-rendered, with the dramatic contrivances clumsily managed.

One such moment in the opening half – used to push our unlikeable couple together under the northern lights—is heavy-handled, one of the very rare moments in which the romance and comedy elements fail to coalesce. Another such scene—which one might describe as the most quintessentially Rogen set piece of the film—cheapens the film as it reverts to predictable shenanigans used to mellow one of our lead characters.

A long shot deserving of your attention

Still, for the most part, Long Shot is an entertaining effort that manages to say something alongside the laughs. One of the more enjoyable comedies of recent months, it has Seth Rogen and especially Charlize Theron to thank for ensuring its extensive 125-minute runtime remains relentlessly enjoyable. Despite tripping over genre conventions into the third act, its many giggles, well-calibrated leads, and statements on gender make Long Shot deserving of a shot at success.