Remembering the legacy of Nipsey Hussle 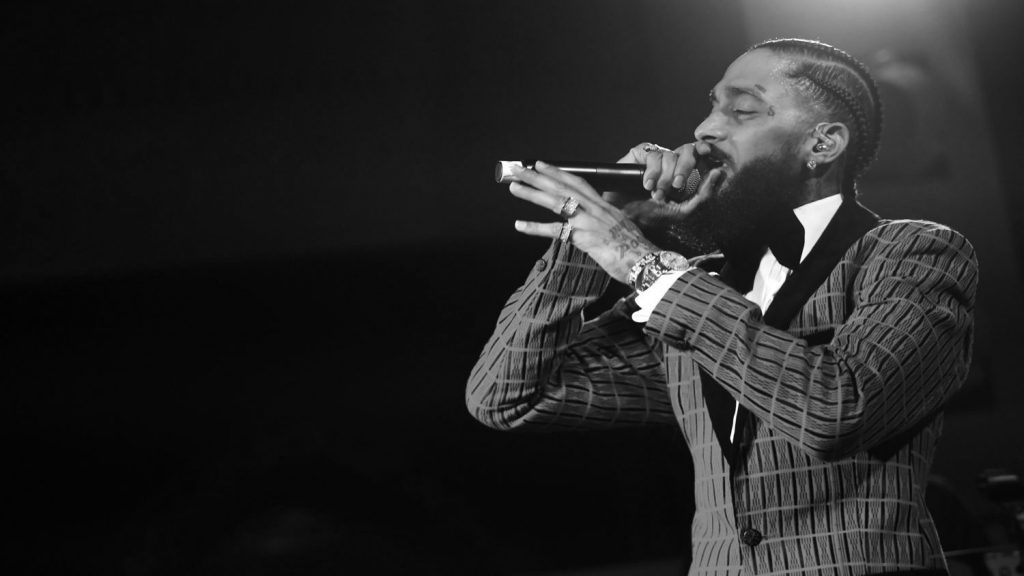 “Pull up in motorcades, I got a show today/This all I’m tryna do, hustle and motivate/Choppers and throwaways, hustle the Hova way/That’s why they follow me, huh? They think I know the way”

These are the opening lines to Nipsey Hussle’s “Hussle and Motivate”, a song on the late rapper’s Grammy-nominated album Victory Lap, and they may sum-up, if that’s even possible, Hussle’s mentality about working hard to overcome adversity and empowering struggling communities. The L.A. native’s murder sent shockwaves through the city and the music industry, prompting vigils and an outpouring of love from fans and fellow artists.

On April 1st, violence broke out at a memorial at Hussle’s store Marathon Clothing where he had been gunned down the day prior, prompting Mayor Eric Garcetti to warn against retaliation in the rapper’s name at a press conference about the apprehended suspect. “The absolute worst way to pay back Nipsey’s loss–somebody we lost to the hands of violence–is with more violence,” he said in a statement.

In doing so, Garcetti cited Hussle’s efforts to combat violence in his community, a major part of the rapper’s legacy. To honor Nipsey, we’d like to take the time to explore that legacy.

Like many South L.A. rappers, Hussle proudly represented where he grew up. The son of an immigrant, he understood the importance of embracing your roots, as evidenced in this interview with Veda Loca on 97.9 The Beat, and avoided putting space between himself and the hard-knocks of growing up in the hood.

His early videos made his gang affiliation with the Rollin 60s Crips clear and his lyrics expressed the sentiments of a young black man working to survive the gritty south-central streets of L.A. with aspirations of making them better, not leaving them. Those that aren’t fans might misinterpret songs like, “Hussle in the House” as promotions of gang-banging but for Hussle, it was an expression of his experience. It was the truth.

While he never hid from his past, he did recognize the importance of maturing and adapting to his new reality once he found a following and success. In an interview with Nessa On Air for HOT 97, Hussle was asked what he thought the biggest misconception about himself was.

His answer: that he had contributed to negativity by talking about the environment he was used to in his early interviews. He recognized that by talking about certain things on camera he was unintentionally promoting an energy at his events that he didn’t want to foster.

In that same interview, Hussle explained his understanding of the music industry by pointing out that it was not created by or for artists. Taking a page out Prince’s book, the rapper often spoke about the importance of owning your sound, both creatively and legally. The rapper notoriously made waves by selling his mixtape Crenshaw for $100 to prove his worth not only to himself but to record execs that had previously undervalued him.

“I’m more or less focused on fully serving the ones that have connected already,” he said in a written statement. “That being said its a value over volume thing…if I’m goin to offer a product made with no compromise or concession to the platforms (radio, A&R opinion, label bias) ect…ect..then the way we sale it has to change.”

The move earned him $100,000, selling out his inventory and catching the eye of rap mogul JAY-Z, who bought 100 copies.

By the time he decided to make a statement about his worth, Hussle had already taken control of his brand and music. Leaving Epic Records in 2010 helped him double-down his efforts of focusing on his own label All Money In. His continued rising only served as anecdotal evidence of the potential of the entrepreneurial spirit he was trying to bring to his community.

Hussle spoke about speaking what he wanted into existence, and it’s evident this is a behavior he adopted early in his career. Videos show him speaking about investing in assets that could appreciate rather than depreciate, like real estate versus jewelry or cars. The rapper led by example by investing in his community. His Marathon Clothing store was just one of the various projects he had lined up for the Slauson & Crenshaw strip mall he purchased, another of which was to renovate the space into a mixed-use affordable housing unit that included healthy food options.

Partnering with tech-wiz Iddris Sandu to help realize what they would call a “smart store”, Hussle took an interest in the intersection between business, technology and the black community. With Sandu’s help, Hussle was able to create a platform for exclusive music and other content and pair it with his clothing business.

Focusing on the future of his community, Hussle also began to invest in STEM programs. At the ribbon-cutting ceremony for Vector 90, a co-working space and STEM center, he spoke about getting black youth excited about math and science. “In our culture, there’s a narrative that says, ‘Follow the athletes, follow the entertainers'”, he said. “And that’s cool but there should be something that says, ‘Follow Elon Musk, follow [Mark] Zuckerberg’.”

Mayor Garcetti spoke about Hussle, calling him, “a tireless advocate for the young people of this city.” He spoke about partnering with the rapper on initiatives to make the tech-industry more accessible to African-Americans, creating easier avenues to business ownership for reformed criminals, and working with the LAPD to curb gang violence.

Nipsey Hussle was a rising talent and a thought-provoking game-changer. He was a spokesperson for his community and motivator for positive change. Because of his background, he knew that without the right role models and opportunities, children in under-served communities are more susceptible to lives of violence and crime just for the sake of survival and he made it his mission to break that cycle.

His murder, while not gang affiliated, is a reminder of the harsh reality of his community and others like it around the country, but highlights a reason, amongst many, why he fought the fight he did and why it’s time for more of us to tag ourselves in.