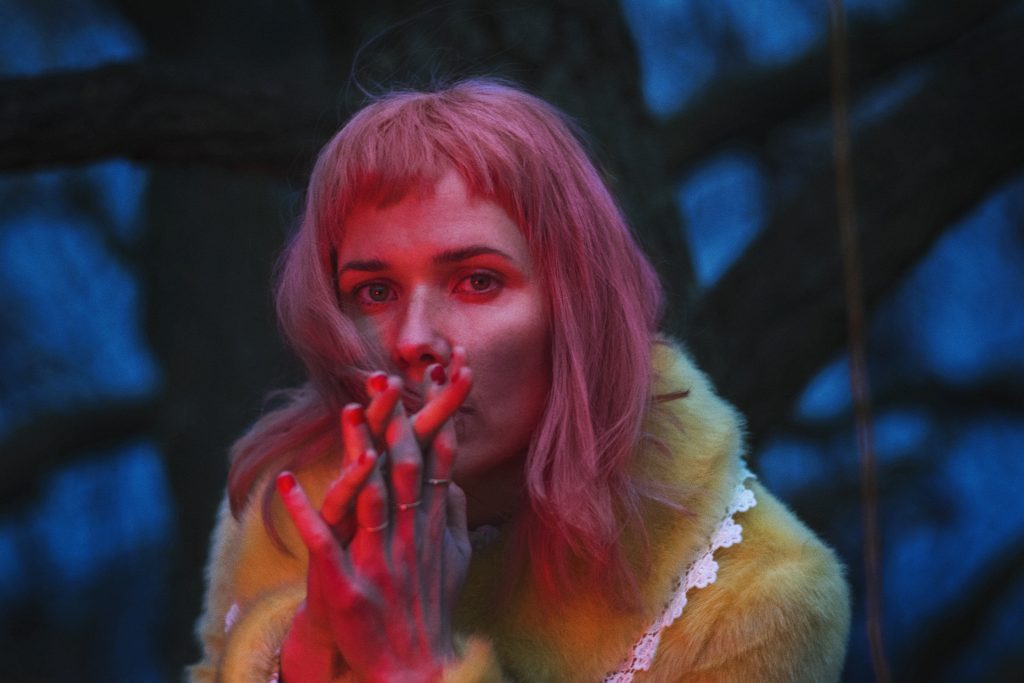 Awhile back, we talked about Danish pop star Oh Land. She had just announced her new album Family Tree and released the first single at the time, “Human Error”, on top of being a judge on the Danish X Factor. This week, we got a chance to catch up with her and pick her brain about performing in the US, her music-making process, and the new album.

Oh Land, or Nanna if you prefer, gave us a call the morning after her performance in New York City at Poisson Rouge.”It was just this really nice presence, you know,” she said. “I had this feeling that, oh no, they must have forgotten about me… but they were like singing along and really paid attention to all the new songs, that was amazing. And also just playing all the new songs for the first time was super intimidating and really nice that they [the audience] received them so well.”

How the process began

The new album she’s talking about dropped this past Friday, May 3rd. Family Tree, produced by Thomas Bartlett (who has produced music for Sufjan Stevens, St. Vincent, Yoko Ono, and countless others), has a very somber, emotional undertone which sets it apart from her previous music.

“It was just a very natural process where the music really led the way. When I went into making another album, I wasn’t planning on how it was gonna sound. I just wrote a bunch of songs out of necessity because I was dealing with a lot of conflicting emotions and a lot of chaos in my private life that I had to shape into songs for my own wellbeing. Those songs just kind of naturally led the way of how the album was going to sound. [They] didn’t ask for much but a really organic and airy soundscape. So when I was introduced to Thomas Bartlett who produced it, it just was like an obvious fit. So it just all happened quite naturally.”

Her previous album, Earth Sick, had a very electronic and calculated production, whereas Family Tree shines with its impactful vocals, very personal lyrics, and orchestral layering.

“If you cook it down the actual making of the songs and producing and recording, that was actually a very quick process, but it was spread over a year and a half, because it need a lot of marinating time… Between writing a song, recording it, and then orchestrating it, there was some other marinating going on just because they have to age and be ready. Like, not all of the songs I immediately wanted to record. But then with time, I felt like, ‘yeah this I was what I want to do.’ I wrote all the songs back in Denmark and then I brought them to New York and recorded with Thomas [Bartlett]… We actually recorded the ‘bone’ structure and most of the whole album in six days.”

Family Tree and changing over time

The album opens with the lyrics of its eponymous song. “I used to love you…” and listening to the single “Brief Moment,” one might be able to understand why Oh Land would need some distance from the song after writing it. It’s lyrics cut deep, and reveal more of a memoir about Oh Land’s emotional parting from her relationship. “Brief Moment” bridges a gap between the deeply personal and hopeful orchestration the orchestration carries.

Other highlights on the album include “Salt,” a metaphor for uncontrollable events in life told through breathy vocals, that stack in the most pleasant way in the chorus.

The finest song on the album, however, is the final track, “After the Storm.” It’s catchy and hopeful chorus is supported by the emotional composure. “After the storm we’re moving slower, even the wind blows a little warmer now,” the song wishes to move beyond the present, even though it is a time that can only influence the future.

The album is clearly connected by its theme of moving on from a tumultuous time in one’s life. Oh Land mentioned that she scrapped songs she was working on for this more thematic and organic concept.

Oh Land’s Family Tree is out now and available for streaming on Apple Music and Spotify.