Black Midi’s ‘Speedway’: the strangest release of 2019 from the band you’ve never heard of 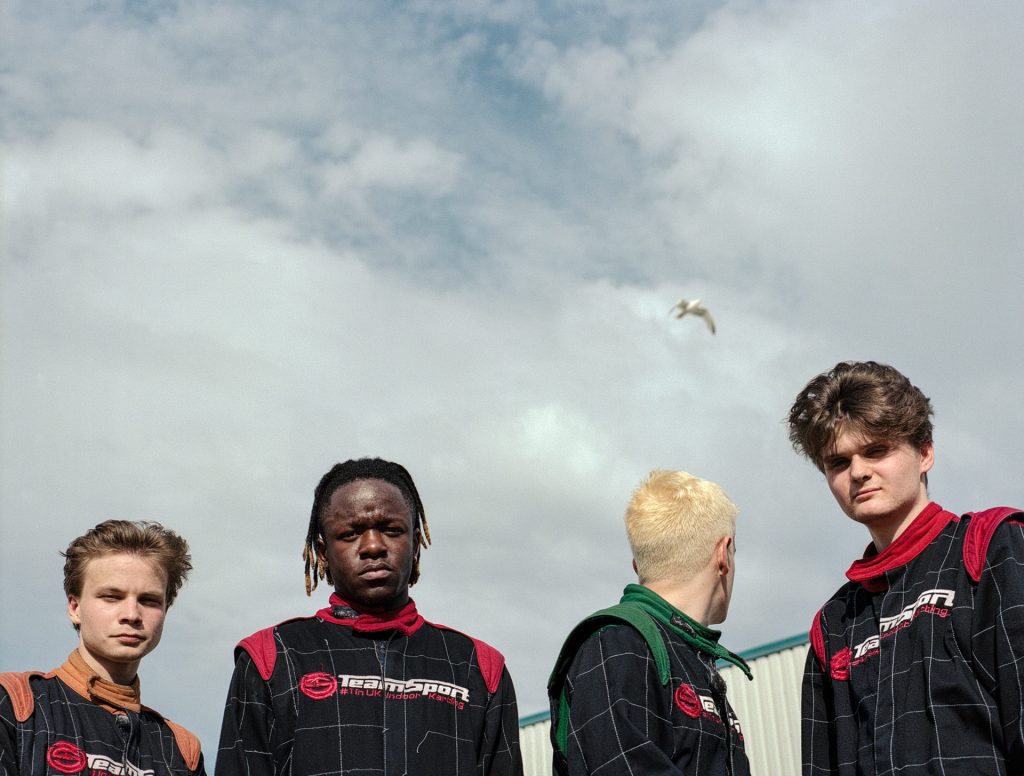 It has been noted that 2019 has the potential to be the ‘year of the big names’ with the likes of Carly Rae Jepsen, Childish Gambino, Foals, Kanye, Lana Del Rey, Madonna, Rihanna, Solange, Tame Impala, The 1975, and Vampire Weekend all set to drop new material. However, deep in the undergrowth exists an entire universe of unknown musical output aching to be discovered. Let us lead you through the dense thicket to the world of Black Midi.

Who are Black Midi?

Black Midi are a London-based four-piece that have created a lot of underground hype in their hometown. Despite this hype, the quartet maintains an air of mystery that only increases their enigmatic reputation. You won’t find their music on Spotify, and if you want one of their rare-as-gold-dust vinyl records, you’ll have to catch one of their live shows and hope that there are any copies left.

The band shares their name with an equally obscure electronic genre known as Black MIDI⏤MIDI meaning Musical Instrument Digital Interface⏤in which digital music software facilitates the creation of humanly impossible compositions whose notation resembles one giant blob on the score, rendering each individual note indiscernible⏤this is a YouTube rabbit hole well worth exploring. Although Back Midi does not produce Black MIDI, their creations are no less bizarre.

Their musical style is unusual, to say the least. Black Midi specialize in extremely dissonant, distorted, disjointed songs that are often cyclical and repetitive, and in no way easily accessible. It is even harder to attempt to pigeonhole them into any one particular genre, although they certainly touch post-punk, noise, math rock, and minimalism. Their songs feature frenetic but tight drumming and piercing guitar parts, producing a claustrophobic repetitiousness. They are masters of building up momentum and putting their listeners at unease, especially when the tension is left unresolved. Add to this Cameron Picton’s stilted vocal delivery, and the end result is a jarring juxtaposition of boredom and paranoia that would befit the most Orwellian of dystopias.

On January 31st, Black Midi released ‘Speedway’, an EP featuring the title track Speedway and three obscure remixes. On the YouTube release, the EP is accompanied by a music video⏤I use the term unimaginably loosely⏤made up of collected found video clips. The end result is a distinctly but intentionally amateurish production. But don’t let that fool you; the quartet have real creative nous.

Let’s start with the eponymous track itself. Barely more than three minutes in length, you would be forgiven for expecting something radio-friendly. With its jaunty rhythm and placid timbres in the intro and first verse, it is easy to fall into a false sense of security early on. However, Black Midi’s ensnaring qualities quickly become apparent, not least due to the assortment of real-life and gaming motor racing clips. The intro and verse are made up of one solitary dissonant chord and bass note, and the ‘chorus’⏤I also use this term unimaginably loosely⏤is made up of a second solitary dissonant chord and bass note. Then, in true Black Midi fashion, it goes back to the start and does it all over again⏤only this time we are kindly blessed with a two-chord version of the chorus and increasingly unsettling drumming. It is at this point that most listeners fall into the Black Midi abyss as the song finally releases almost two minutes of tension by means of a frenetic jam accompanied by clips of equally-frenetic greyhounds. But don’t get too comfortable, as 30 seconds later, listeners are plunged back into the unrelenting hook for one final head mash.

Toward the climax of the song, the montage of found clips augments the frenzied instrumentation with an onslaught of repeated finish-line splices, which eventually bow out to the jaunty rhythm and placid timbres from the intro. The accompanying video cuts suitably to a vast image of the night sky, inviting listeners to stare into their screens at the absolute zenith of existential angst.

But the fun doesn’t end there. Oh no. Remixes by Proc Fiskal, Kwake Bass, and Blanck Mass continue the theme of oddball music and found clips. Musical highlights include Proc Fiskal’s juxtaposition of trippy 90s beats (reminiscent of elements of the Adventure Time soundtrack) with poorly-tuned acoustic guitar strums. Video highlights include some otherworldly GeoGuessr performances and a heated battle between cartoon pirates of the canine and feline variety. The entire production is extremely trippy and amateurish, which seems to be the desired aesthetic. But is there more to Black Midi and ‘Speedway’ than mere Internet trollery?

What it all means

“Cameron Picton surveys scenes of urban blight and gentrification in a cold but clear monotone that’s part Mark E. Smith, part Siri,” remarks Stuart Berman of Pitchfork. It is this vocal delivery, that captures all the tedium of a tannoy announcement tinged with the paranoia of a bad acid trip, that provides listeners with the majority of the context to the music. The lyrics often juxtapose new and old things and emphasize that they “don’t sit right,” whilst indecipherable mumbles including “dog shit park” hint that maybe Picton isn’t a fan of these new things after all.

It has also been noted that ‘Speedway’ illustrates how rapid technological advancements may not lead to greater freedom but instead confinement, which is further illustrated by the closed-loop of the track. The incessant audio and video theatrics can invoke a state of sensory imprisonment and it does not take a giant leap to consider modern society’s consumption of⏤and dependence on⏤social media and the digital world as a whole, as the sparkly screens of our many devices vie for our precious time and attention.

This theme is neatly juxtaposed with the band’s relatively small digital footprint and inclination to live off-the-grid (pardon the racing pun). Moreover, it would explain the inclusion of the increasingly Internet- and game-based found clips and digitized remixes. The speedway is also a fitting symbol of Black Midi’s cyclical compositional style and frenetic performances. The band’s latest release is perhaps a haunting reminder that society ought to avoid morphing into some sterile Huxleyan nightmare.

So then, is ‘Speedway’ artistically valuable? Are Black Midi visionary or vainglorious? In today’s age, we have reached a bottleneck whereby much disposable, commercialized drivel makes it through into the mainstream. Even some of the best new mainstream music can be watered-down to suit industry standards. This phenomenon is easy to explain as, through the proliferation of modern technology and music software, almost anyone can start making music. Whilst this is great in some ways, it makes it harder to be heard above the noise. Artists, now more than ever, need to be commercially viable if they are to stay afloat. Thus, Black Midi’s off-the-grid approach and unpolished aesthetic may be an antidote to this phenomenon. Whilst it is unlikely to give rise to a new lo-fi movement, it may be enough for Black Midi to survive deep within the musical undergrowth.

Their music is both gimmicky and profound in equal measure. Most significantly, they espouse the notion that music does not have to be enjoyed in the usual sense. Instead, music can occasionally provoke typically negative states such as unease or dread⏤otherwise, it would be like Hollywood but without the suspense and drama, and where’s the fun in that? Whilst the mainstream hit-parade produces predictable crowd-pleasers that don’t ruffle too many feathers, Black Midi are offering up a dose of raw, unfettered emotion, warts and all⏤a punch of garage-rock analog with a pinch of biting irony in the form of unfeeling, machine-like tedium. With this alarming mix of anxiety and placidity that mirrors the darker aspects of our technologically hamstrung society, Black Midi may well be an antidote to the Huxleyan tendencies of mainstream pop.

What does the future hold?

Black Midi have recently been signed by indie label Rough Trade. But can they remain avant-garde garage rockers? Their ‘Speedway’ EP is notably softer and more dynamically balanced than their previous records, but if their latest major live performance on KEXP is anything to go by, Black Midi are a long way from losing their edge. However, it will be intriguing to see if their digital footprint grows in parallel with their relatively large off-the-grid presence, as the latter is undoubtedly more in keeping with their overall aesthetic.

As an aside, there is a notable difference between the quartet’s studio and live performances, with the latter far rawer and distorted than the former. Their live version of bmbmbm on KEXP is especially erratic and shrill, and the use of a video played from a smartphone through guitar pickups adds to the sense of unease that Black Midi so easily generate. This performance also illustrates the importance of the drums to the musical infrastructure, which provides a nailed-on groove that regulates and contextualizes the madness. Again, their live performances confirm the band’s intention to stay raw.

Black Midi are still far from the big-time and likely have no intention of making it, as it were. Will we see any commercial development in the coming months and years? Yes, probably. Will it overshadow their niche, vinyl-only, fuck-the-system idiosyncrasies? Not a chance.

If you want to catch them live, the band are currently touring the UK and have revealed their first US dates, performing in San Diego, Los Angeles, and New York.