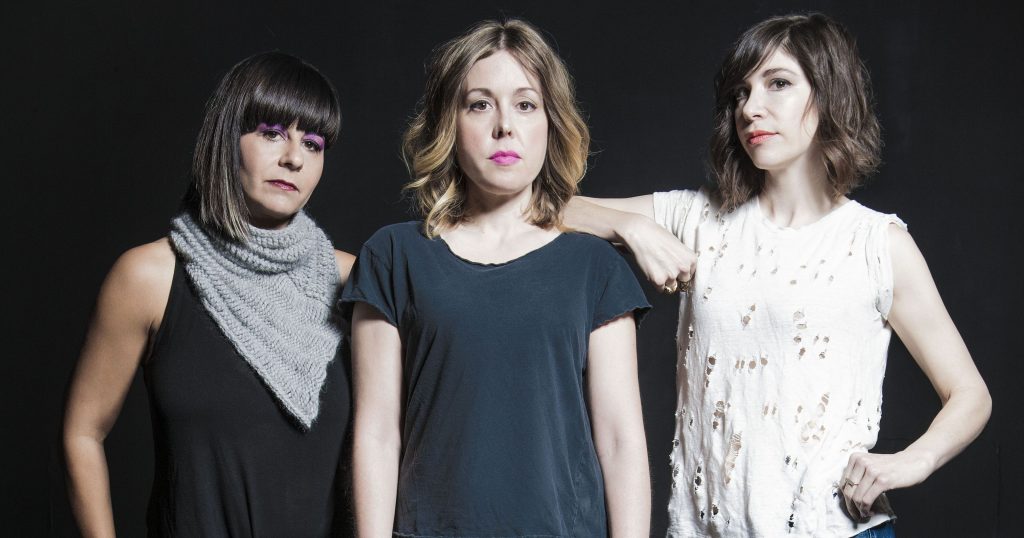 If ever there was a musician whose career could stand as a testament to the power of music to motivate positive social change, it’s Corin Tucker.

From her riot grrrl roots in bands like Heartless Martin and Heavens to Betsy to her phenomenal run as singer/guitarist for legendary punk trio Sleater-Kinney, Tucker has shone a light on misogyny, homophobia, corruption, and inequality at every turn. Her unmistakable primal croon and fiery lyrics are a rallying cry against the apathy that all too often holds society hostage.

Tucker’s most recent project, Filthy Friends–a meeting of the minds between her and R.E.M. guitarist Peter Buck– finds her continuing to fight the good fight. The group’s debut, Invitation, arrived in the summer of 2017, nine months into the Trump administration. Its punchy lead single, “Despierta,” told off the President in no uncertain terms: “You ruled, you made decisions without thinking of our needs / You and all your friends feasted while we fought to make ends meet…”

Nearly two years later, as the nation’s stress fractures continue to deepen, the band is gearing up for their sophomore release. If Emerald Valley sounds heavier and angrier than its predecessor, it’s for a good reason.

“I think that [the sound is] more of a reaction to the times that we’re living in right now…just living in the political era after the election,” Tucker says. “And that definitely played a part, I think, in writing this album.”

Tucker first met Buck via her husband, filmmaker Lance Bangs, who had previously collaborated with R.E.M. on several music videos. She ultimately sang backup vocals on Buck’s first two solo albums, and the duo soon began writing songs together. By 2014, the band’s earliest incarnation had formed and played its first live show under the moniker super-Earth.

“I think there was an instant chemistry,” Tucker says. “My vocals and his guitar playing kind of clicked together instantly…I think that you can’t overlook the power of chemistry—of having…two different skill sets coming together.”

For proof of that chemistry, look no further than Invitation. Buck’s and Tucker’s sensibilities mesh together perfectly, unleashing a relentlessly catchy and fun amalgam of blues, punk, and glam-rock. With Tucker’s bittersweet punk wail surfing on Buck’s signature jangling guitar grooves, the record could easily pass as a lost R.E.M. work with a slightly more jagged edge.

That the two musicians work together so well stems in part from the fact that they’ve mutually admired one another’s work for decades. Buck became a Sleater-Kinney aficionado after witnessing the group’s explosive energy at a 1997 live show. And Tucker has been an R.E.M. superfan ever since her college professor/folk musician dad gave her a copy of the band’s 1983 debut Murmur. She cites their first four records as personal favorites, particularly 1986’s Lifes Rich Pageant.

“It just had all the elements of the loudness with the kind of beautiful strumming songs as well,” she says of Pageant. “‘Begin the Begin’…it’s a call to arms, in a way, that I absolutely love.”

As Tucker notes, her collaboration with Buck also works thanks to their differing approaches to music-making, which complement each other in a unique way. “Peter is very prolific,” she says. “He writes a lot of stuff…so he’s always got several things of…Hey, what about this? What if we tried this? And I just have to force myself to write. But…we both bring things in and try different things.”

However, Filthy Friends is very much a group effort. The duo’s bandmates–longtime Buck associates Scott McCaughey and Linda Pitmon on bass and drums, respectively, and guitarist Kurt Bloch, erstwhile of Seattle punk stalwarts The Fastbacks–all play a pivotal role in the band’s sound. Throughout the making of Emerald Valley, Tucker says, her bandmates were eager to experiment and push one another out of their comfort zones.

“We’re still kind of getting to know each other, but we’ve learned a little bit about…our strengths and weaknesses as a band,” she says. “Everyone in this group is really good at kind of serving the song and, and maybe….just hanging back a little bit. I really like that. I like the ability to be flexible and try different things.”

Life in the Emerald Valley

Tucker has described Emerald Valley as a love letter of sorts to her hometown of Eugene, Oregon–often referred to as the “Emerald City.” Eugene, she says, is located in a part of America that’s borne plenty of calamity at the hands of the current political administration.

“It’s a really special, beautiful place,” she says. “Our whole region is being affected now by climate change to some degree. You have these wildfires in the summer that are pretty severe. So it’s my way of kind of speaking up about what’s going on and…also it is a tribute to the beauty of the region and just hoping that we can hold onto that and make some changes.”

The first of Emerald Valley’s two singles, “Last Chance County” paints a harrowing and damning portrait of 21st century American capitalism. Pitmon thumps out a driving beat with an eerie, caustic riff from Buck as Tucker speak-sings the opening lines in a nervous growl:

Tucker describes the track as “semi-autobiographical,” recalling riding the bus to her waitressing job at Mr. K’s Cafe in Eugene’s Valley River Center as a teen. As she puts it, the bus ride demonstrates a fundamental American reality.

“I grew up pretty middle class, [and] you definitely see people that are struggling sometimes when you ride public transportation,” she says. “It was just a good chance to throw all those people together, and to say…in some ways, we are all on this bus together. We are all in this together as a region and as a country, and we have to…make choices economically that aren’t about the middle class and the upper class.”

In contrast to “County,” vitriolic follow-up single “November Man” offers a more direct—but no less scorching—condemnation of President Trump and the systems that keep men like him in power:

And hair of gold

You made the deal

“As much as it pains me that Trump was elected…there are reasons why,” Tucker says. “He really played the jobs card very successfully, because we are struggling with that and there are people that are desperate. And we have to address that in order to reform as a country and to have a more equitable system.”

In addition to gearing up for Filthy Friends’ upcoming tour this May, Tucker is finishing up the latest record from a reunited Sleater-Kinney. Along with fellow members Carrie Brownstein and Janet Weiss, she’s worked on the trio’s as-yet untitled ninth album for the past several months, with producer Annie “St. Vincent” Clark at the helm.

St. Vincent and the group, Tucker says, go way back. Weiss knew Clark when the latter was a member of Texan psych-pop enclave The Polyphonic Spree, and Clark also made appearances on several episodes of Brownstein’s hit IFC series Portlandia. They’d all discussed working on music together for a while, and it’s now becoming a reality.

“She’s really, really talented and excellent at what she does,” Tucker says of Clark.

Emerald Valley is out May 3 on Kill Rock Stars.