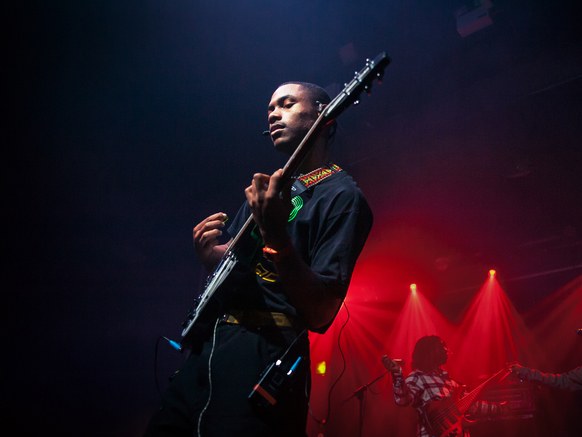 Hip-hop production is a delicate art, and not nearly enough producers receive the credit due for their ingenuity behind the controls. Here are 10 producers who had a major impact on the sounds of 2018. We’re looking forward to hearing what they roll out next.

An active beatmaker since age 14, the Memphis native was one of 2018’s breakout stars. Popping up on cuts by everyone from Travis Scott and Drake to Lil Wayne and Lil Yachty – all while still enrolled full-time at Middle Tennessee State University. His crowning achievement: the mega-hit “Sicko Mode,” which earned the 22-year-old a Grammy nomination for Best Rap Song. More recently, Keith produced tracks on Future’s The WIZRD (released earlier this month) and continues to build up his production label, Drumatized.

Lacy joined Odd Future’s resident neo-soul collective the Internet in 2013, co-producing their subsequent album Ego Death—which garnered the group a Best Urban Contemporary Album nod at the 2015 Grammys. The multi-instrumentalist’s scrappy, soul-tinged sensibilities have since caught the attention of Kendrick Lamar, J. Cole, Isaiah Rashad, and Vampire Weekend (who have recruited him for this year’s forthcoming record, Father of the Bride). His 2017 debut solo EP—aptly titled Steve Lacy’s Demo—made him a star in his own right, and the following year saw him contribute to records by Blood Orange, Mac Miller, and Ravyn Lenae, as well as the Internet’s excellent Hive Mind

A protégé of Boi-1da, Ontario’s Ebony Oshunrinde has built up a steady stream of big-name production credits since age 17 when she worked on “Crown” from Jay-Z’s Magna Carta Holy Grail. The 21-year-old’s expansive resumé includes work alongside Rihanna, Young Thug, Lil Uzi Vert, Drake, and Big Sean. She’s also lent a hand with every Travis Scott release since 2013–including a pair of cuts from ASTROWORLD.

2016’s 99.9%—a magical, glimmering whirlwind of retro-funk and 808-soul—should have been Louis Celestin’s one-way ticket to superstardom. Granted, it did win him the prestigious Polaris Prize that year, but far too many seem to remain unaware of the journeyman Haitian-born Québécois. Still, the accomplished über-talent soldiers on. Kaytra’s 2018 work included remixes of Lou Phelps, Kelela, and Robert Glasper, in addition to the Nothin’ Like U / Chances EP featuring guest spots from Shay Lia and Ty Dolla $ign. What’s next for him? With luck, something that gets him the fanbase he deserves.

The Swedish composer had his biggest year yet in 2018. Besides his score for the blockbuster Marvel flick Black Panther, he and perennial collaborator Donald “Childish” Gambino” Glover reunited for a pair of brilliant, blistering singles in “This is America” and Summer Pack. Göransson somehow also found time to score four other films last year (including Venom and Creed II). As for 2019, he’s rumored to be among the guest producers for Kanye West’s upcoming record Yandhi—a combination that’s sure to further propel his already-rising star.

Over the course of the decade, the Ontario-born Interscope signee has become one of the most sought-after names in modern hip-hop. In 2018, he helped give Drake his fifth U.S. number one with Scorpion cut “Nice for What,” while his tracks for Cardi, Migos, 2 Chainz, and 6ix9ine also made impressive chart leaps. Murda (born Shane Lindstrom) has two mixtapes to his name thus far—including last year’s Smokepurpp team-up Bless Yo Trap—and is reportedly working on a third.

The Yonkers-based Ritter has worked with the biggest names in the business throughout his impressive career—Kanye, Future, Nicki Minaj, Rihanna, and so on. His artistry was well-nigh inescapable last year, popping up on tracks by Cardi B, G-Eazy, Jay Rock, Tinashe, Drake, and Travis Scott. He also served as a co-producer on four tracks off Metro Boomin’s solo debut Not All Heroes Wear Capes and released his first trio of solo singles. If his astounding track record is any indication, Ritter will be sticking around for quite a while, and 2019 will give him plenty of opportunities to put his talents to work.

Kenneth Blume III found himself in dire financial straits at the beginning of 2018, having quit his EDM DJ gig to focus on rap. It turned out to be a decent decision on the Connecticut native’s part. He spent the rest of the year lending a hand to sizable chunks of new records by some of the hugest rising talents in the game—Rico Nasty, JPEGMAFIA, Ski Mask the Slump God, 03 Greedo, and Vince Staples, to name a few—and full-length collabs with Key! and ALLBLACK. That heroic May-December run, combined with his knack for creatively tailoring beats to suit his artists, made a star of Blume—and made “Whoa, Kenny!” among the most instantly recognizable tags in recent memory.

Ronald LaTour helped orchestrate the new wave of Atlanta trap that launched artists like Young Thug into superstardom. He continued his innovative streak through 2018, reuniting with Thug for much of his Slime Language compilation and lending his sparse, soulful style to studio efforts from Meek Mill, Gunna, Nav, Trippie Redd, Lil Baby, 21 Savage, and many more. Wheezy kicked off the new year with multiple appearances on Future’s The WIZRD.

J White Did It

He certainly did. After winning a BET Hip Hop Award for Best Single of the Year for Cardi B’s savage “Bodak Yellow,” J went on to reteam with Cardi for an additional pair of cuts from her debut full-length Invasion of Privacy. One of them, the grand celebration of Latin culture that was “I Like It,” became one of the duo’s most massive hits, debuting at No. 8 on the Hot 100 and meriting a Record of the Year Grammy nomination. Hard to say how White will follow up such a wildly successful year, but his prowess as a hitmaker remains extremely promising.