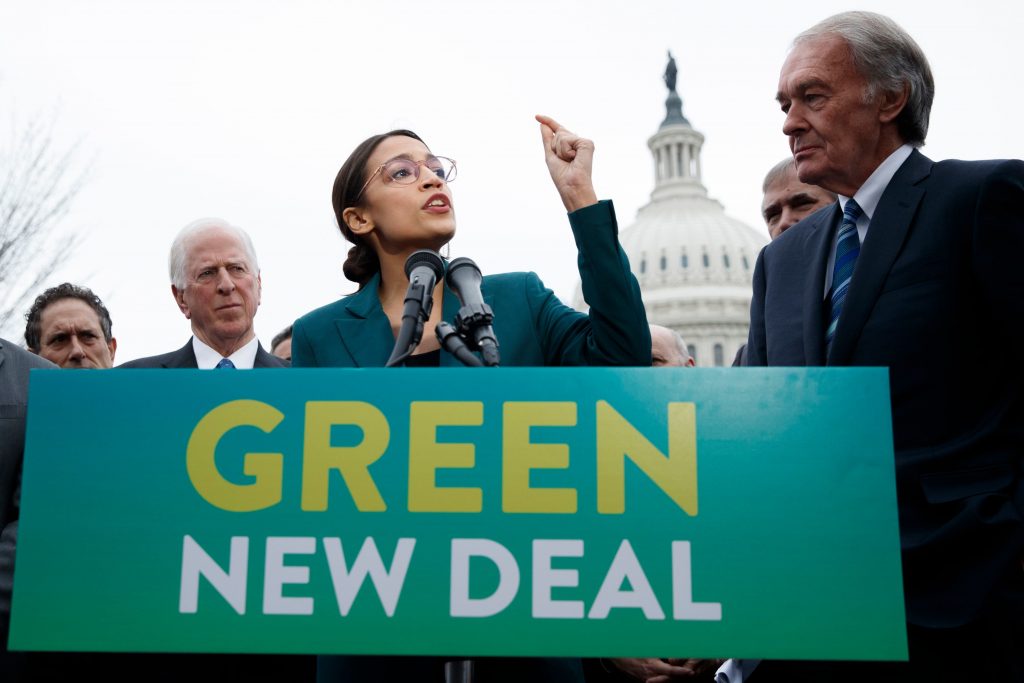 Since the induction of the 116h United States Congress, the popular narrative has circled around the fresh class of Democratic Socialists who have brought bold new legislation, such as Medicare for All, back to the forefront of the political conversation. Rep. Alexandria Ocasio-Cortez, in particular, has received unprecedented attention as a freshmen Congressperson only months into her first term.

A bulk of that attention can be attributed to her campaign promise of introducing a Green New Deal, an ambitious piece of legislation resolving, among other things, to convert the United States to 100% clean, renewable energy. On February 7th, the official legislation was introduced to Congress.

Proud to stand with @SenMarkey and over 60 Original House Cosponsors today to introduce our #GreenNewDeal resolution for both the House AND Senate!

Drafted by Democrats Ocasio-Cortez of New York and Senator Ed Markey of Massachusetts, the measure calls for a strategy to remake the U.S. economy while eliminating all U.S. carbon emissions. The deal calls for meeting 100% of the power demand in the United States through clean, renewable, and zero-emission energy sources, ultimately completely removing fossil fuels from the equation. This would include upgrading all existing buildings for energy efficiency, working with farmers to eliminate pollution and greenhouse gas emissions, and expanding high-speed rail so broadly it would render air travel obsolete.

The initiative calls for a 10-year commitment to a national mobilization toward those goals. In addition, these goals circle around an infrastructure program that its authors intend to create millions of new “green jobs,” while guaranteeing health care, “a family-sustaining wage, adequate family and medical leave, paid vacations and retirement security” to every American. This time frame is largely based off of the report that global carbon emissions will need to be curbed 40-50% by 2030 to not irreversibly affect the planet. These measures would put the United States at the forefront of a global movement toward clean energy.

This summer we'll gather thousands at a Presidential primary debate to make the #GreenNewDeal the top issue in 2020.

The Green New Deal has seen large support from grassroots direct action groups such as Justice Democrats and Sunrise Movement, a movement of young activists dedicated to passing legislation to stop climate change while creating millions of jobs in the process. Justice Democrats, a political action committee, are committed to creating a platform to elect a new Democratic majority in Congress, one of their success stories being Ocasio-Cortez herself. These type of young political activist groups, with an understanding of social media and an ideology that appeals to the millennial demographic, have had a profound hand in moving the Green New Deal legislation forward.

Politically, the measure has picked up steam as well. Before the resolution was officially introduced, over 60 House and Senate Democrats declared they would co-sponsor the legislation, including Representatives Ro Khanna, Pramila Jayapal, and Ayanna Pressley. The Green New Deal has also seen support from Democratic presidential candidates such as Kirsten Gillibrand, Cory Booker, and Kamala Harris. Senator Harris went so far as to declare, “For too long, we have been governed by lawmakers who are beholden to Big Oil and Big Coal. They have refused to act on climate change. So it’s on us to speak the truth, rooted in science fact, not science fiction.”.

The most obvious initial opponents of the Green New Deal hail from the Republican Party, claiming it lacks the backbone to match the breadth. The Republican National Committee derided it as “a socialist wish list.”, while we can thank Bob Salera, spokesman for the National Republican Congressional Committee, for bringing the word “zany” back into the lexicon with his description of the resolution. On the other spectrum, Green New Deal proponents have been vocal that the updated version sidesteps carbon capture and storage technology, as well as over-emphasizing electric transportation, essentially feeding Elon Musk’s Messianic complex.

However, some of the Green New Deal initial hurdles may start from leadership on the left. Speaker of the House Nancy Pelosi has shown little enthusiasm for introducing the legislation as well as her support. Recently when asked about the measure, Pelosi responded, “The green dream or whatever they call it, nobody knows what it is, but they’re for it right?”. She has also declined proponents of the measure the committee had requested to flesh out policies for the legislation.

Supporters of the #GreenNewDeal aren’t the idealists, we’re the pragmatists. We’re doing what has to be done to save the planet from climate change. The idealists are the deniers and fossil fuel interests who think we can continue to do nothing and not face the consequences.

The current legislation is a non-binding solution. It would not in itself create new programs even if it were to pass. It is also unlikely to pass in its current form. However, should it pass, it would highlight and affirm the House stance that movements should be made towards these initiatives in the future. Either way, the conversation has officially been started on how to save the world from succumbing to a boiling cauldron of seawater and the Koch brothers in rafts.