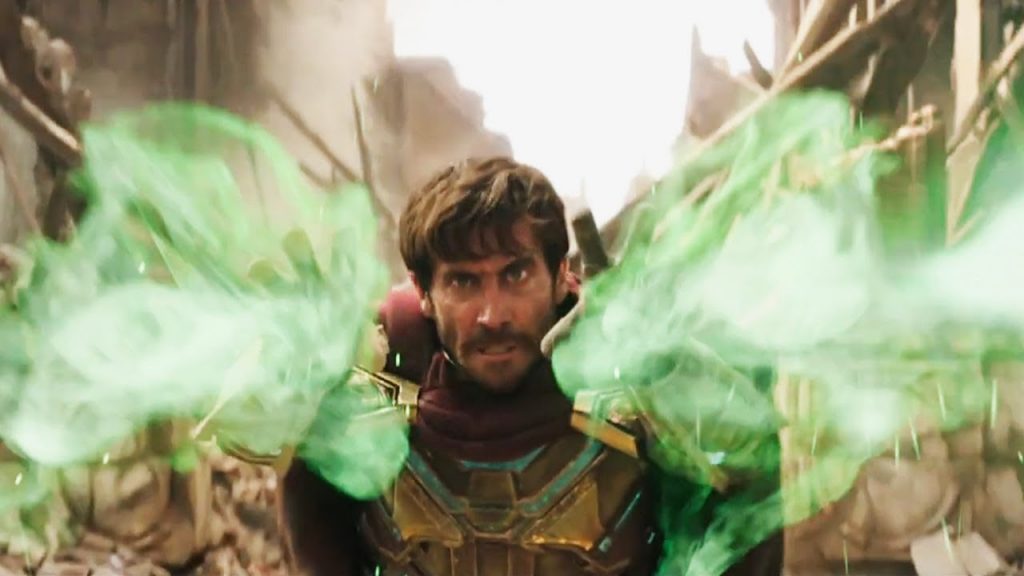 The trailer for Spider Man: Far From Home just dropped yesterday and it definitely had some challenges to address—greatest among them was that its lead character Spider-Man, last seen in Avengers: Infinity War, was, well…SPOILER ALERT if you’ve been living under a rock…made into dust by Thanos and is apparently very, very dead.

Turns out that the trailer largely ignores that challenge and presents itself as another exciting entry into the Marvel Cinematic Universe and sequel to Spider-Man: Homecoming. We see our web-slinging hero alive and well, wisecracking and zipping about. The “Far From Home” subtitle, which many had thought was going to reference the fact that Peter Parker was last seen in outer space in Infinity War, instead just refers to him being on a class trip to Europe. He web-slings, gets bullied by classmates, and says some awkward things to a potential love interest. Then Mysterio shows up. And this is where Marvel Studios had, and clearly overcame, its second greatest challenge.

Mysterio, (played by Jake Gyllenhaal), is one of Spider-Man’s oldest baddies. And he’s also one of the weirdest and hokiest. He first showed up in “The Amazing Spider-Man #13”, published in June of 1964, the brainchild of creators Stan Lee, Jack Kirby, and Steve Ditko. Mysterio doesn’t really have a super-power, he’s just really good at hypnosis and magic tricks. His backstory: a Hollywood special effects coordinator who went nuts and became a villain. Most of his grand schemes involve a lot of literal smoke and mirrors. He’s the epitome of 1960s comic book weirdness. Oh, yeah, and his costume is essentially a scaly bondage outfit topped with a hot-boxed fishbowl.

Obviously this could have gone very, very wrong.

But for my next trick…

Marvel has had a lot of good luck handling their most bizarre creations. Characters like Dr. Strange, Ego the Living Planet, Rocket Raccoon, and Dormammu don’t seem like they would make for interesting movie characters. It actually seems like those are too big, too strange, and too flat-out weird to be accepted as elements of a major blockbuster. Mysterio joins that list. Other Spider-Man movies have played it safe. Doctor Octopus, Sandman, and the various Goblins are a pretty standard comic-book-movie rogues’ gallery. But Marvel isn’t a company interested in playing it safe. Marvel looks at ‘weird’ and says “Hey, lean into the skid.” Which makes the Jake Gyllenhaal-as-Mysterio reveal in this trailer that much more fulfilling and impressive. Quite simply, Marvel nailed it.

The smoke, the suit, the overall weirdness—the fishbowl!—it’s all there. And then he flies around fighting a water monster.

"He's like Iron Man and Thor rolled into one."

It’s dedication to the things that made comic books kinda comic book-y in the first place. There’s no attempt to tone it down or make it more palatable. There’s no DC-style attempt to reign things in or make them feel “real” and “dark”. It’s pure comic book joy, embracing its comic book roots. The MCU is good at many things, but maybe its biggest skill is making the cheesy stuff look awesome. It makes it look cool. And it’s no wonder why Twitter nearly broke yesterday after this grand reveal.

Thanks for the applause, I’ll be here all week

Much has been made about the fact the trailer ignores the events of Avengers: Infinity War. There’s also a debate raging in the halls of Internet fandom about whether this Mysterio is portrayed as too heroic (he seems to be battling the water monster villain). It’s hard to believe that Marvel would take a villain and turn him into a hero, but it’s not impossible (if you wanna sound smart with your friends, remind them that adorable dancing Groot from Guardians of the Galaxy was originally a bad guy that The Hulk fought). Our guess is that Mysterio will still be bad. And our guess is that Peter Parker will likely make it back to high school alive and in one piece after his class trip. Many other fans are surely picking apart this trailer for clues as to Tony Stark’s/Iron Man’s fate considering he was Peter’s mentor yet is nowhere to be found here. The trailer for Avengers: Infinity War, a movie which comes out before Far From Home, suggests he may not make it.

– Pepper Potts signed the check from the Stark Relief Foundation
– Peter looked at the suit Tony gave him with sadness in his eyes
– Happy said "You're all alone"
-Tony Stark is DEAD 😭#SpiderManFarFromHome pic.twitter.com/6nCjFDUch6

Nonetheless, what we do know is that Mysterio still looks awesome and it’ll be interesting to see what one of the best and most versatile actors in Hollywood can bring to that role.  We’ll see all of this magic when Spider-Man: Far From Home hits theaters July 5th.