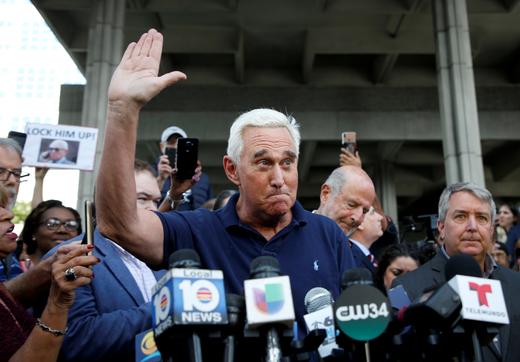 Early Friday morning on January 25th, Roger Stone was arrested at his home in Florida. Stone was indicted for seven counts of obstruction, making false statements, and witness tampering in connection with Special Counsel Robert Mueller’s investigation. A longtime Donald Trump advisor, the charges focus on Stone’s alleged lies to the House Intelligence Committee in 2017 involving his statements about and efforts to get in touch with Wikileaks during the 2016 campaign. So how did we get to Roger Stone waking up to “FBI. Open the door.”?

Who is Roger Stone?

Roger Stone has a reputation that precedes himself. Such is life for someone with a tattoo of Richard Nixon on their back. In 1972, Stone left George Washington University to work for Richard Nixon’s re-election committee. Stone, 19 years old, was the youngest player involved in the Watergate scandal. Working as a junior advisor for one of Nixon’s aides, he was involved in several forms of tampering with information and spying on Democratic rivals.

Known as “The Prince of Darkness” within the Republican Party, Stone continued a career in politics, working for the Reagan campaign in 1976 and becoming president of the Young Republicans in a campaign managed by his friend, Paul Manafort.

His relationship with Donald Trump began in the 90s, when Stone worked as a lobbyist for the Trump casino business. He has remained an on-again-off-again advisor to Trump ever since. Stone was part of the initial campaign team when Trump announced his Presidential ambitions in 2015. Though he departed after clashes with other staffers, Stone remained in close contact with Trump throughout the campaign.

What Did He Do?

Stone frequently spoke about the hacks and leaks of Democratic emails in the lead up to the 2016 general election. He claimed to have communicated with Julian Assange, founder of Wikileaks, which had posted the emails. He went so far as to praise the online persona “Guccifer 2.0” who took responsibility for hacking the DNC. Ominously, Stone repeatedly hinted that more damaging material on Hillary Clinton was still forthcoming.

The new indictment claims that after July 22, 2016, “a senior Trump Campaign official was directed to contact Stone about any additional releases and what other damaging information” WikiLeaks “had regarding the Clinton Campaign.” The actual charges against Stone, however, don’t allege that he committed any crimes during the 2016 campaign. Stone now stands accused of attempting to obstruct investigations into what happened afterward. During the election season, Stone had proudly been claiming communication, even dining, with Assange. By 2017, he was putting forward an apparent cover story for whatever actually did happen in 2016. He now insists that everything he heard about Assange and WikiLeaks came from just one person — talk radio host Randy Credico, whom he called his “intermediary”. Stone has been accused of lying about this to the House Intelligence Committee in 2017 and trying to tamper with a witness to stick to that false story.

What Does This Mean?

Roger Stone: I probably am the person in the indictment https://t.co/zOWDTXBFFy

There is ample documentary evidence presented to make the case that Stone’s story about Randy Credico being his only contact with Julian Assange was indeed false. There are also allusions to what Stone was allegedly telling top members of the Trump campaign about WikiLeaks’ plans, which could compromise the President. If found guilty, Stone could face several decades in prison per his arraignment. On Tuesday morning Stone plead not guilty and is scheduled to reappear in court on Friday.

Overall, the indictment makes the case that Stone was lying about the topic of WikiLeaks, but it does not read as any sort of final effort from prosecutors to sum up what did happen back then. When asked if he would turn on the president, Stone responded, “I have been very clear about the fact that I cannot and will not implicate the president because I would have to perjure myself in some way to do so”. On Monday, White House Press Secretary Sarah Sanders denied the president’s involvement, saying, “The more that this goes on the more and more we see that none of these things have anything to do with the president”.