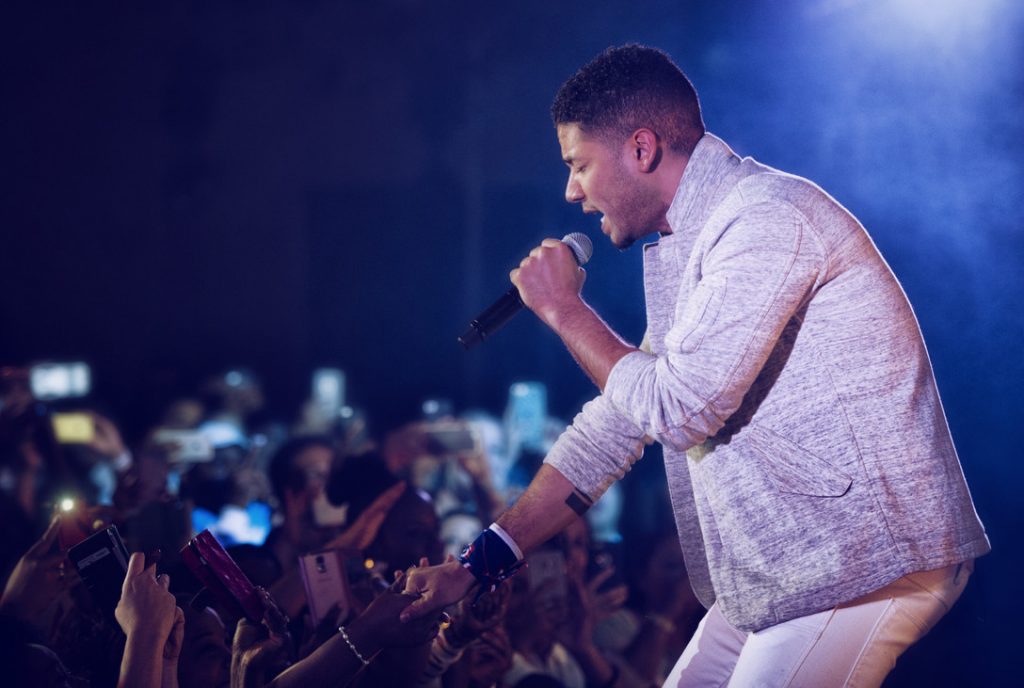 Jussie Smollett, known for his role as Jamal Lyon on the television series Empire, performs at Yokota Air Base, Japan, Dec. 15, 2015. As part of the United Service Organizations Empire tour, cast members participated in meet and greets, spoke with Yokota High School youth and hosted and performed a family-friendly White Party. Smollett said that the tour was a great opportunity for him to give back and share thanks to service members. (U.S. Air Force photo by Airman 1st Class Delano Scott/Released)
Share
Facebook Twitter LinkedIn Pinterest Email

Last month I wrote an article in which I dissected the nature of today’s protests and explored the shifts in activism over the past few generations. The piece looked at this generation’s mission to define, study, and spotlight intersectionality. My conclusion was that today’s calls for true equality ring into spaces and corners that they never have before. They include the marginalized groups within the marginalized groups. They recognize that a group plagued by one -ism or phobia is not immune from perpetuating another -ism or phobia. What I failed to elaborate on is why. Jussie Smollett is why.

Last week the Empire star was the alleged victim of a brutal attack in which two men physically assaulted him, called him both racist and homophobic slurs, pour what authorities think to have been bleach on him, and left him injured with a rope around his neck and the declarations of “MAGA country” ringing in his ears. For me, the news comes with a karmic dose of revelation. As a fan of the show Smollett stars in, I often criticize storylines in which his character and his character’s brothers find themselves in danger citing a lack a realism due to their level of fame, wealth and therefore security. They say art imitates life.

Unfortunate and painful coincidences aside, the news of Smollett’s confrontation is a reminder of the space that minorities exist in this country. What does it say about the state of America when arguably the most notable gay black man in pop culture can be the target of a hate crime?

It is a testament to the fact that racism alone is so embedded in the American fabric that wealth and privilege provide a very thin security blanket for minorities. Smollett isn’t the only victim here. He’s a highly visible person and still fell prey to the dangerous side of ignorance. Less visible persons are in even more danger because they don’t garner national news coverage when they’re beaten by savages, raped by abusers, or murdered just for being themselves.

Smollett was, for lack of a better word, lucky, and he knows it. A hopeful statement put out by Smollett showed the actor’s recognition of a sickening reality. After reassuring fans that he was okay, he took the opportunity to remind fans that, “…these types of cowardly attacks are happening to my sisters, brothers and non-gender conforming siblings daily. I am not and should not be looked upon as an isolated incident.” His sentiments are understated. Despite the target his blackness and queer identity paints on his back, being trans, a woman, or both would have quadrupled his chances of being the victim of an attack.

Hate crimes are on an uptick. The latest reports by the FBI show an increase of 17 percent in overall reported hate crimes from the previous year, a five percent increase in reporting of hate crimes motivated by sexual orientation and a 16 percent increase in anti-Black hate crimes. It’s easy to point a finger at the president because without argument his rhetoric insights very divisive actions. But yelling at an orange brick wall doesn’t tire the brick wall. It’s not enough anymore to sigh and utter, “Come on guys, it’s 2019”. The response has to change.

One thing I came across in preparing to write this piece was the repeated use of the word ‘allegedly’ by other news outlets. That word is maddening to me. Even still I’m sure my own editors will squeeze it in somewhere. But Smollett’s injuries weren’t alleged. The rope placed around his neck wasn’t alleged. The words hurled at him so loud his manager heard them over the phone weren’t alleged. He was the victim of a hate crime. Period. I understand journalistic integrity (or maybe this rant proves that I don’t) but the rhetoric we use in response to acts of violence and hate is more important than ever. Stop calling these attackers people of interests and start calling them cowards. Call out the fact that MAGA is being used in conjunction with hate speech and acts of violence. Hold politicians accountable for the actions they take that spin the wheels of inequality and discord. But that’s the easy part.

It is time for media outlets (and everyone else too) to take a study in intersectionality and understand how racism, homophobia, transphobia and other social ills have evolved and compound each other. It is an absolute danger to dismiss what’s happening to people who identify with multiple minority groups.

More importantly, minority groups have to look within and have conversations at dinner tables, churches, and political events about intersectional issues. Straight white men aren’t the only problem in America. Yes, they do commit the most domestic terror attacks and hate crimes but things like homophobia are magnified in minority cultures. That’s a problem. There is a very real issue of racism and transphobia in the LGBTQ community. That’s a problem. I’ll skip the flowery speech and skip straight to the cliché. Nobody moves forward if some of us are held back. Comedian Jaboukie Young-White said best in a tweet, “being black and lgbtq is v [sic] chill in this day & age. cool slang, constantly on edge in public, alienation from your own culture because of a religion that was murderously forced on your ancestors, house music”.

I admit it was hard for me to write this article. I procrastinated reading the constant updates about Smollett’s progressions through this horrifying moment in his life because I see myself in him and it scared me to see someone who represents me in the way reports described him. This ordeal broke me for a few days. But that is the black experience in America. It is the gay experience in America. Even worse are the experiences of trans people, especially when they are trans people of color.

It is time for collective groups with the privilege of a platform to yell louder than ever; to attack. I hope Smollett’s experience is an alarm to those that think this country has progressed further than it actually has, those that think black and brown people are just jumping to conclusions and assuming the worse when we “make everything about race”, or those that criticize marginalized groups for seeking and creating safe spaces on campuses or in workplaces.

A lot of people, whether they fight for social change or not, seem to have blindfolds on. They see this picture of America, but it’s blurry. They see the outlines, can kind of make out its shape. Maybe they can make out blatant racism and homophobia. They don’t see the concept of privilege or institutionalized racism. They can’t make out why representation matters. Progression starts by removing the blindfold.  You can’t win a fight, for justice or otherwise, when you can’t see the problems in front of you. It’s is our responsibility to use our voices to challenge the consciousness of this country. This country was not intended for queer, black, trans, women. It’s time to talk about why.