MARINA reinvents herself with “Handmade Heaven” 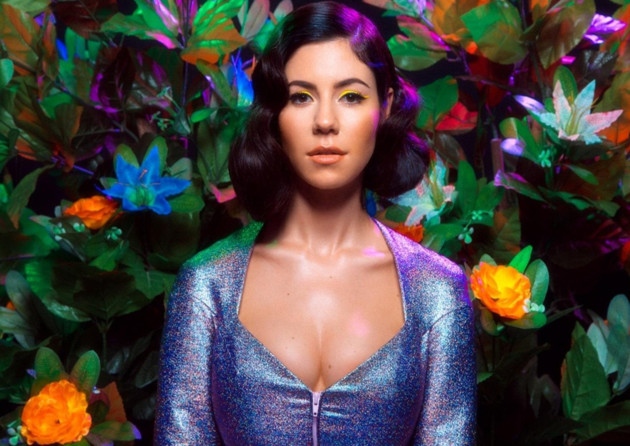 You may know her by her old stage name, “Marina and the Diamonds.” Maybe her full name, Marina Diamdis. You may not know her at all. MARINA burst back onto the scene this week with her first music release since her album Froot in 2015. After a short hiatus following the album’s Neon Nature tour, Marina announced a break between music releases on her Instagram page. She took the time to regroup, align her chakras, and vowed for a more honest version of herself in her music. Hence her 2018 Twitter announcement that she would be readjusting her moniker as “Marina,” dropping the “Diamonds” from her title.

One sentiment Marina shared about her new music was that she wanted to return to her roots. Marina’s first album, The Family Jewels, was a stripped down pop record. The songs were built atop a framework of uplifting piano melodies and refined with a twinkly, fairytale-like production. The Family Jewels was about capturing the essence of American dreams, being that Marina is from England, her obsession was less admirable and more of an outsider’s perspective. “Hollywood,” a single from the album, gives a good feel of what the album embodied.

Following her chart success, mostly in the UK and Europe, Marina’s following albums, Electra Heart and Froot, had a more elaborate production value. Marina worked with Diplo and Dr. Luke, producers of music by pop superstars like Justin Bieber and Beyonce, for tracks on Electra Heart. “Lies” and “Primadonna” exemplify the way Marina’s sound was turned on its head for this album. It was a sound that Marina quickly wanted to divorce, claiming that it was tiring playing a persona outside of herself. Her following album was a flourish of cohesive sound. The lead single, “Froot” was a powerhouse, synth-pop party that “Primadonna” wanted to be, but lacked the uniqueness and quirkiness that Marina wanted to grace.

Marina left us with the morbid “Immortal” before leaving her fans in the dark. A self-reflective lament of forever trying to keep up with mortality. “Handmade Heaven” picks up where “Immortal” left off. Marina’s buttery voice is assertive over a stripped down production. Marina always performs as an outsider looking in. “The skyscrapers glow, like they’ll never fall down,” she sings in falsetto as she juxtaposes nature with the manmade world. There’s no grit in this song – Marina sounds like an angel. By all means her voice the star of this show. The lyrics in “Handmade Heaven” fall short of nuanced, but the polished sound of this tune is meant as a comeback, an introduction to what Marina has been working on.

We at Qrewcial look forward to Marina’s reintroduction. “Handmade Heaven” is available to stream, and Marina’s new album is expected early this year.