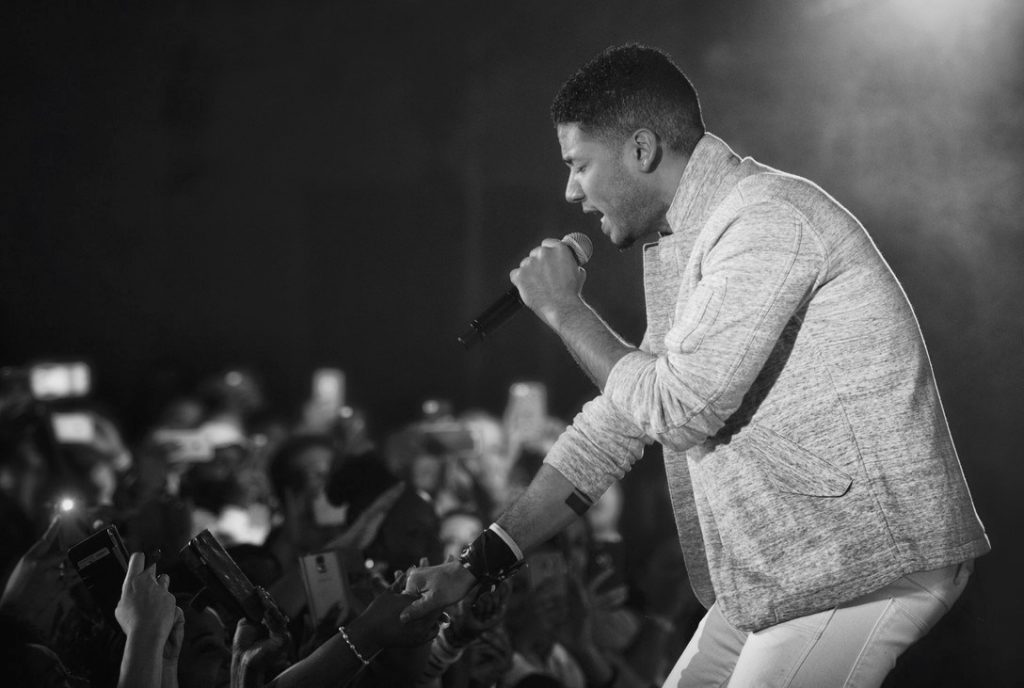 Jussie Smollett, known for his role as Jamal Lyon on the television series Empire, performs at Yokota Air Base, Japan, Dec. 15, 2015. As part of the United Service Organizations Empire tour, cast members participated in meet and greets, spoke with Yokota High School youth and hosted and performed a family-friendly White Party. Smollett said that the tour was a great opportunity for him to give back and share thanks to service members. (U.S. Air Force photo by Airman 1st Class Delano Scott/Released)
Share
Facebook Twitter LinkedIn Pinterest Email

My article Queer. Black. Trans. Woman. explored how Smollett’s “attack” should have served as an eye-opener for those who can’t accept how deeply embedded some -isms and phobias are in American culture. The article chastised media coverage of this and other events, specifically the use of the word ‘allegedly’ during circumstances where a seemingly obvious crime had occurred, especially racially-motivated ones. Most importantly it noted Smollett’s luckiness that he wasn’t one of the thousands of less visible victims.

That same article now serves to highlight the people most vulnerable now that news of Smollett’s arrest and alleged staging hit major networks. In one fell swoop, he endangered the lives and well-being of those that occupy spaces even tangential to the ones he occupies. Simply put, what Jussie Smollett did is going to potentially create more victims and re-victimize sufferers of crimes who now have to deal with the collective second-guessing this stunt is going to inevitably cause.

If #JussieSmollett orchestrated this scam and claimed he was attacked because he’s black and gay, the real tragedy will be all of the victims of REAL hate crimes whose stories won’t be believed. pic.twitter.com/XIWwXazg5L

From the moment news broke of the now-disgraced Empire actor’s alleged attack, he had many detractors, specifically ones that looked like or identified with the supposed assailants of this and potentially a previous incident—white, MAGA-hat wearing, white men. Many questioned Smollett’s timing in alerting police, his unwillingness to submit his phone as evidence, and other suspicious behaviors like continuing to wear the noose his alleged attackers placed around his neck, all of which he seemingly explained during an interview with ABC News‘ Robin Roberts.

Rumors about him being written off Empire fueled various narratives. The show has been teasing the funeral of an unknown character since the beginning of this current season. This indiscretion may have all but guaranteed his fate—thank God—which would make total sense seeing as this whole ordeal has shown us he’s not that great of an actor anyway. Less fortunately, however, now that Smollett’s detractors have seemingly been proven correct, the opportunity for them to bash people that look like him is wide open and the vast majority of us don’t have the same privileges of security teams and blacked-out SUV’s he does.

What Jussie failed to realize when he selfishly appointed himself the poster child for hate crimes with this fabrication is that all conversation that started with his victimhood and ended with commentary about queer people or people of color and the safety concerns for both is now officially fruit from the poisonous tree. In the previous piece, for instance, the totally legitimate FBI statistics about hate crimes, the commentary about the gay black experience, and the call for social change is all effectively wasted. Entire anecdotes about hate crimes in America will be subject to indiscriminate efforts of de-legitimization.

Furthermore, those whose political and social ideals align with Smollett’s will themselves be unjustly scrutinized despite whatever valid thoughts they may express. Just the same as it was when he was presumed to be a victim, whatever transpired early that morning is bigger than the actor. Inevitably the negativity his actions will cause is only going to be compounded when accounting for intersectional spaces meaning the more you look like Jussie Smollett, the more danger he’s just put you in. Gay, black men living and working in Chicago may have just become the most targeted group of people in America.

And for what, a paycheck? If accusations are true that Smollett organized this elementary school play of an attack because he was frustrated with his Empire take home, then that just goes to show that the only thing he might be worse at than lying is logical thought. What was supposed to come of this charade in ways of a pay increase?

Smollett’s soul had tiny shreds of redemption when it was assumed he’d done this to further conversations about racism and homophobia in this country but knowing he orchestrated this deception over a misguided sense of self-importance adds insult to injury. The difference between what it could have meant for minority and LGBTQ communities when he was a victim and what it means now that he’s a suspect is the difference between a threatened group and an endangered one and no MAGA-hat wearing, white man is responsible for that. A gay black one is.

It’s interesting that Smollett belongs to those two communities, gay and black, because so often these two cultures find themselves at odds. Today, though, the gay community is going to have push through its “no fats, no fems” brand of racism and the black community is going to have to quell its homophobia and both are going to have to take this loss for what it is. There’s no way to spin this. There’s no way to cite slavery or years of oppression because no matter what his motivations, Smollett was wrong. The typical tropes of white America trying to ruin another black man are bankrupt because whether or not that sentiment is true, Smollett brought this on himself.

But as of Wednesday, there is no place for explaining away whatever happens to him as a symptom of bigotry. The imagery of the hate crime victim has already been perverted enough and to continue to chalk this up to anything other than justice being served would be to condone his actions. It’s time these communities stopped using racism and homophobia as a security blanket for wrong-doers and the larger repercussions of Smollett’s actions are exactly why. It’s hard enough to distance yourself from the mistakes of people that look like you when the rest of your community is injudiciously spewing every excuse to defend their actions.

One upside to Smollett’s idiocy is that racist and homophobes around the country are about to out themselves. Anyone who considers this some type of ‘win’ for their political agenda and or personal bias is only going to prove that if an actual hate crime had occurred, an alarming amount of people either wouldn’t have cared or would have felt that it was justified. Those people are going to be loud and proud and hopefully, as was the trend last year, they will lose their jobs, their positions of power, or find themselves in handcuffs. Hallelujah.