The death of arena rock, part one: Netflix’s Mötley Crüe biopic The Dirt 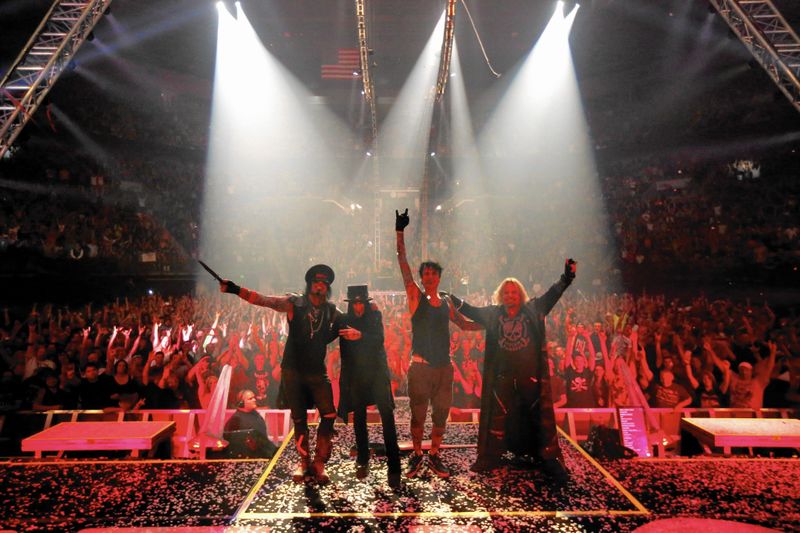 Biopics are all the rage these days, and next on the conveyor belt is Mötley Crüe’s The Dirt, which comes to Netflix in March. This release follows the Marmite Freddie Mercury biopic Bohemian Rhapsody and precedes the forthcoming Stardust, which tells the story of David Bowie, unendorsed by the late singer’s estate. The first trailer of The Dirt is loaded with the kind of unadulterated hedonism for which Mötley Crüe became known, starkly juxtaposing the band’s zenith and nadir points. With the #MeToo movement in full swing and social justice at its peak, the ageing rockers couldn’t look more antiquated if they tried.

In light of the release of The Dirt, this three-part special looks to consider the rise of arena rock and its later fall from grace. The first part shall consider the arena rock phenomenon in the context of rock and roll history and shall seek to ask whether arena rock is truly dead or if it lives on in another form. The  following series shall dive into the nitty-gritty of why arena rock seemingly vanished into thin air, considering the impact of key socio-political, technological, and musical developments since the mid-to-late 1990s.

Back in 2014, Mötley Crüe signed a legally-binding “cessation of touring agreement” that came into effect after their Final Tour, which ended on 31 December 2015. However, with the upcoming biopic that includes four new songs, the band’s final farewell lasted little over three years⏤perhaps the $200 million from the Final Tour didn’t quite cut the mustard. For a no-frills name, the Final Tour gave fans more than their money’s worth in pyrotechnics and featured a 155-foot drum roller coaster⏤yes, you read that correctly⏤dubbed the Crüecifly.

In 2017, co-founder Nikki Sixx appeared hopeful of a reunion, stating that “time heals all wounds”. Reminiscing so eloquently further, he continued: “We made millions and millions and millions of dollars, slayed [sic.] thousands of girls and destroyed a million hotel rooms”. Clearly, the biopic wasn’t just about spinning a yarn. Moreover, despite being active for over three decades, their only true musical successes came in the 1980s when arena rock was at its peak.

What is arena rock?

Crudely put, arena rock was the lovechild of glam, hard rock, and commercial incentives. Often dubbed pejoratively as “corporate rock”, “hair metal”, or worse still “dad rock”, arena rock was borne of the successes of bands including KISS and AC/DC in the 1970s. With this narrow definition, notable arena rock bands include Guns ‘n’ Roses, Bon Jovi, Whitesnake, Van Halen, and KISS themselves. Inspired by 1970s glam, the movement’s aesthetic was superficial, material, and gimmicky, featuring wild-haired, leather-clad men laden plastered in outrageous make-up. Musically, its poppy guitar riffs and anthemic choruses made it a perfect radio-friendly genre. For all its hair-raising braggadocio, arena rock was a surprisingly timid affair by musical standards.

That is arena rock as a movement and genre. However, arena rock could also be defined as the phenomenon of stadium-filling, world-touring A-list rock bands; this would stretch to include artists from The Beatles to Nirvana and beyond. This wider definition allows one to place the arena rock movement within the context of the rock and roll timeline. Artists including The Rolling Stones, Pink Floyd, and Queen have all achieved this ‘arena rock’ status.

Now for a potted history of rock and roll. Its origins lie in the African-American work songs of the 1800s, which at the turn of the twentieth century developed into popular song forms that became known as jazz and blues. The Delta blues of Son House and Arthur Crudup inspired the world’s first rock star, Elvis Presley. Whilst John Lennon was decidedly wrong when he stated that “Before Elvis, there was nothing“, Elvis was the Cambrian explosion of rock and roll, inspiring the likes of Chuck Berry, Buddy Holly, and Little Richard to name but a few. With the arrival of The Beatles, The Rolling Stones, and the Kinks on American soil during the British Invasion of the mid-1960s, rock and roll was firmly established in the popular mainstream.

The evolution of rock and roll continued from the 1960s, permeating all corners of popular music and culture, not least rock music. AC/DC’s Angus Young famously adopted the duckwalk stage move popularized by Chuck Berry during the infancy of rock and roll. This is just one obvious example of the rock and roll lineage, the most notable example being the proliferation of the 12-bar blues progression, which shall be discussed further in parts two and three. Elsewhere, pop superstars including Michael Jackson, Prince, and David Bowie were direct descendants of rock and roll, highlighting its universal human appeal.

Most importantly, rock and roll isn’t just a genre. It’s a countercultural, anti-establishment, in-your-face social movement that inspired a generation of teenagers and vexed their parents⏤what wasn’t there to love? Although it has seen many forms over the years, the core message has remained the same. However, this raises a question: can arena rock really be rock and roll? Sure, it’s hell-raising goodness, but can it really be with the people for the people and a cash cow at the same time?

The flame that burns twice as bright burns half as long

Arena rock ruled supreme throughout the 1980s and nothing looked like stopping it⏤until 1991, that is. Enter grunge. On September 24, Nirvana released their sophomore album, Nevermind, which became an overnight success. Grunge had existed since the mid-1980s but was not commercially successful until Nevermind; the Seattle outfit’s first album, Bleach, had gone largely unnoticed. However, the addition of Dave Grohl on the drums made the band click. Butch Vig’s infamous production triggered a tidal wave of fuzz including fellow Seattleites Pearl Jam and Soundgarden. Grunge harnessed the vitality of punk and rejected the superficiality of arena rock, making it appear desperately outdated in the process.

Kurt Cobain’s suicide note famously quoted the line “it’s better to burn out than to fade away” from Neil Young’s ‘Hey Hey, My My (Into The Black)’. This concept is often aptly used to describe Nirvana’s meteoric rise to fame before Cobain’s untimely passing. It could also be applied to the likes of Mötley Crüe and Guns ‘n’ Roses in the opposite sense, in that perhaps their legacies would have remained untarnished had they not mounted several comeback attempts. Mötley Crüe may have returned with all guns blazing in their Final Tour, however, the band’s image took a hit as its lewd reputation preceded them, jarring with twenty-first-century sentiments.

The less said about Guns ‘n’ Roses’ comeback, the better; Axl Rose is the epitome of a flame now burning half as bright (at most). However, as neat and comforting as the above aphorism may be, it is certainly not always true. How would one begin to explain the sustained success of The Beatles, Michael Jackson, or Bowie, for instance? The arena rock empire may have been overthrown by grunge, but did it cease to exist?

The bigger they are, the harder they fall

There is no doubt that the arena rock genre fell hard. But is it really dead? As discussed earlier, one can define arena rock as the 1980s movement fuelled by commercial incentives and ample drugs. But one can also refer to the phenomenon of A-list rock bands touring the world and filling stadiums everywhere they go. By this definition, Nirvana would themselves qualify as arena rock.

In terms of modern rock movements, the 1990s also featured pop punk, Britpop, and nu-metal. These genres gave the world a number of stadium-filling bands including Greenday, Oasis, Red Hot Chili Peppers, and Rage Against the Machine. Rock movements in the 2000s included emo, garage rock, and indie⏤meanwhile, pop punk and post-grunge were still going strong. These genres gave the world the likes of My Chemical Romance, Fall out Boy, The White Stripes, The Strokes, and The Killers.

It is worth highlighting My Chemical Romance’s 2006 album, The Black Parade, for it is very much a concept album of old that re-packaged the late 70s glam-opera style to suit a post-9/11 world. The emo outfit struck a balance between nostalgic glam and contemporary pop punk, achieving what is surely one of the twenty-first century’s best homages to the arena rock movement and Queen; it is “a rock and roll gem that celebrates everything that was over the top about the 1970s rock scene”.

All these bands, and others, at least flirted with the arena rock realm, but two bands come up trumps: Foo Fighters and Muse. By the mid-2000s, Dave Grohl had become a rock music linchpin, with a hand in Nirvana, Foo Fighters, and Queens of the Stone Age. And lest we forget his appearance as the Devil in Tenacious D’s unforgettable ‘The Pick of Destiny’. Humor aside, Grohl’s career formed a bridge between the twentieth- and twenty-first centuries, giving the latter its closest thing to a traditional rock band.

With respect to Muse, the Devon band is perhaps the twenty-first century’s answer to arena rock. There are so many parallels to the 1980s movement it is hard to know where to begin. Firstly, Muses’ aesthetic harbours all of the glam and futurism of Bowie and Queen. Secondly, they have composed many memorable riffs in songs including Plug in Baby, Hysteria, Stockholm Syndrome, and Supermassive Black Hole. Thirdly, they aren’t afraid of putting on a show; from pyrotechnics to indoor zeppelins and a shape-shifting, screen-laden pyramid, the band go to great lengths to wow their audiences. However, Muse produced perhaps their wackiest spectacle to date for their Drones World Tour, and their latest work shows no signs of reigning-in their otherworldly tendencies.

Muse is modern-day rock-opera. No other band can pull off the quasi-Queen sound with such conviction, and few would consider annexing an album with a three-part ‘symphony’ as with The Resistance. However, despite all this theatre, Muse stands out from bygone arena rockers in that they offer genuine artistic value and their music contains deep underlying messages⏤two qualities Mötley Crüe certainly cannot boast.

On with the show

The arena rock movement didn’t die, it became extant. Occasionally, like a dormant volcano, it erupts onto the scene and grabs people’s attention, not least those who are in its impact zone. Netflix’s The Dirt is another such transient episode that will provide both entertainment and disdain. However, arena rock as a phenomenon lives on, if only through a handful of artists. Muse is quite possibly one of a dying breed: a true arena rock band with a glam bravado that would surely have impressed Freddie Mercury himself.

The fundamental reasons as to why rock has been ousted from the mainstream domain shall be left for the next article. Part two shall consider key socio-political, technological, and musical developments since the mid-to-late 1990s, including the rise of hip-hop, independent labels, and the Internet. It will also look to answer the following question: is hip-hop the new rock and roll?