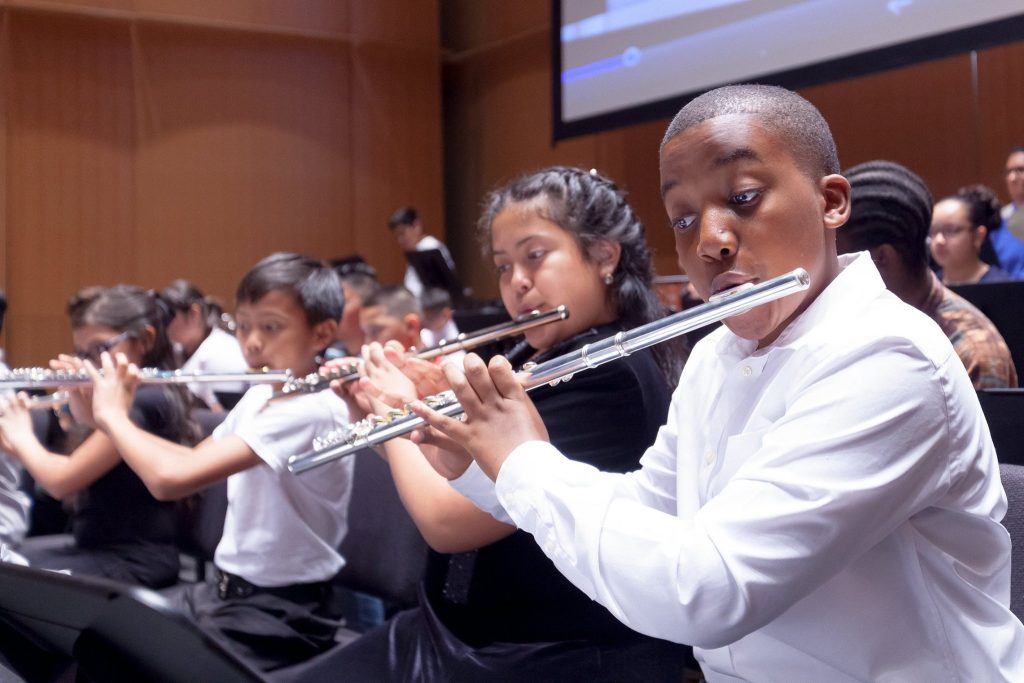 “Many studies show a correlation between musical training and academic success, in both children and adults. Learning to play an instrument stimulates the brain, improving functions like memory and abstract reasoning skills, which are essential for maths and science.” It is no wonder then that the Renaissance ideal included musical proficiency.

However, the last two decades have seen a rapid decline in the inclusion of music as part of core curricula. This is mainly due to budget cuts and squeezes of various sorts. On the surface, this may seem benign and merely an unfortunate consequence of the difficult reality of recessions, inflation, and financial crashes. Something’s got to give, hasn’t it? And when it inevitably does, it’s customary to be told that the decision comes with ‘much regret’. Besides, as much as we all like music and the arts, it’s just a bit of fun, isn’t it?

Music is a fundamentally human activity that has played a central role in society for millennia. It is also inherently linked to mathematics⏤consider the work of Pythagoras, Fibonacci, and Da Vinci, for instance. It is this duality of social and cognitive utility that illustrates how axing music from the curriculum may prove to be an extremely short-sighted move.

In a letter to the Guardian, Jess Gillam, 20, wrote, “Learning an instrument can teach and develop so many fundamental life skills. It promotes discipline, empathy, determination and cooperation as well as providing a sense of community and worth.” Gillam also wrote, “Music is not an add-on, a “soft” subject or a luxury – it is absolutely essential to our existence. Every child deserves the opportunity to experience its benefits.” Gillam is not the first individual to voice the benefits of music education, and such striking remarks are surely worth entertaining,

Elsewhere, there have been many compelling accounts of the positive impact that the inclusion of music in core curricula has had on academic performance. Not only have students had fun, but schools have noted a rise in attendance and, most importantly, a rise in maths and English performance. The same source has highlighted the fact that budget cuts have sparked a rich-poor divide, which has made access to quality music education a ‘postcode lottery’, forcing the parents of musically-deprived children to fork out for their children to take up music as an extracurricular activity.

In 2018, West End veteran Andrew Lloyd Webber called the budget cuts “a national scandal” and a “false economy.” Lloyd Webber also highlighted that in terms of cold, hard cash, the arts are more than pulling their weight. He stated, bitingly, “If there’s a civil servant with a brain in the Treasury . . . he or she should brief the chancellor on how much tax he collects from the ever-increasing contribution that the arts make to the British economy.” Later that year, the world’s favourite musical redhead, Ed Sheeran, also spoke out against the decline of music education. He warned that government policy is “damaging one of Britain’s best and most lucrative exports”.

In addition, music therapy illustrates the range of social and neurological benefits of music for child development. The field has also shown how deeply-rooted music is in the human brain, most strikingly within music therapy for dementia, which appears to rejuvenate sufferers and has been said to improve cognitive function and memory. Just think of all those song lyrics and melodies we’ve memorized without trying, yet we struggle to retain important information such as new phone or credit card numbers. The impact of music on the human brain lies in its extensive neurological reach⏤listening to and playing music activates many regions in our brain, which makes it a great all-in-one mental workout.

So, if music education is beneficial socially, academically, and financially, why is it being axed from curricula left, right, and centre? Why deprive ourselves of one of the most fruitful human endeavours? The answer has eluded all but the most conspirational of minds, and with an arsenal of evidence to support the vast array of benefits that come with learning music from a young age, we are reaching a crisis point wherein the generations currently beginning their academic journeys won’t know any different⏤our children, and ultimately society as a whole, will be the ones to pay for our short-sighted decision-making.

In Britain, more than two-thirds of children are making music, a study by charity Youth Music shows. At first, these findings appear to go against the general trend of this argument. However, this new, music-making phenomenon is a likely corollary of the democratisation of technology, which has seen the spread of access to free music and music software. Marvellous⏤so we can all go home then? Not quite. Whilst it is good news that more children are making music⏤or musicking, to use the gerund term coined by the late Christopher Small⏤we should be harnessing this activity in order to capitalise socially, academically, and financially.

Whilst this increase in musicking is by no means an exclusively British phenomenon, the decline in music education and successive budget cuts announcements in Blighty have sparked a countermovement⏤and nowhere more does this phenomenon reach fever pitch than with Foo Fighters’ Just PLAY events. The Seattle rockers have teamed up with Rocksteady to give children across the country the opportunity to learn Foo Fighter riffs and beats “regardless of whether or not they’ve ever played an instrument”. These free workshops are the beating heart of the budget cuts countermovement but are too sparse to have any real lasting impact. The only body with sufficient authority is the one causing the damage in the first place. Until that changes, nothing will.

What can we draw from the above findings? We can draw that music has not only a cultural and historical place in our education systems but a place that is vital both socially and cognitively. What’s more, the financial draws alone should satisfy the more politically- and business-minded individuals that are seeking financial incentives not to exclude music from curricula. Education is the means by which human knowledge is passed on from generation to generation. It is fundamental to the continuation of the sum of human knowledge. To stop teaching a subject is to see that subject, and its fruits, wither and die.

Perhaps society should not be so tolerant as to submit to the whims of its own cherished values without taking the time to stop and check it is still on course. We live in an increasingly scientific world in which technology and productivity rule supreme. However, scientific modelling has taught us the value of testing hypotheses in the real world, adjusting them, and then re-testing. To simply remove music from curricula without regard for the consequences is surely short-sighted and damaging⏤chopping off one’s arm would undoubtedly result in weight loss, but it is seldom the best course of action.