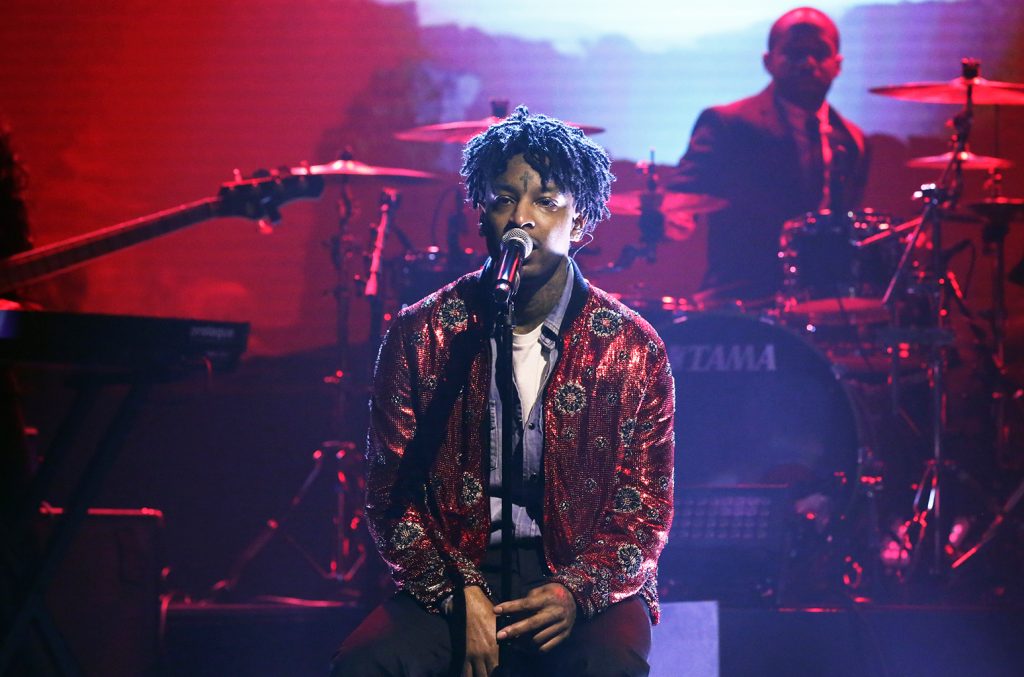 The political conversation surrounding immigration in this country has grown louder and louder in the past few years. The president’s demand for a Mexico-funded border wall has sparked a debate that’s building platforms for politicians. But like most issues in the digital age, politicians aren’t the only ones speaking their minds on illegal immigration and immigration reform in this country. Many celebrities have taken to social media, written music, or made videos to voice their opinions about how the government handles deportation and other immigration-related issues. The risk they take is relatively small given their status. So when Atlanta based rapper 21 Savage took time during his Tonight Show performance to call out, amongst other things, the current border crisis involving the separation of children from their parents, his arrest days later by Immigration and Customs Enforcement (ICE) and the subsequent threat of deportation seemed suspicious.

The arrest came as a shock to many of his fans because he’s never been vocal about being an immigrant, potentially because he immigrated to the United States from the UK when he was just seven years old. According to ICE officials, the rapper, real name She’yaa Bin Abraham-Joseph, entered the country legally in 2005 but has been here illegally since his visa expired a year later in 2006. He was just 14 at the time. They also cite a felony conviction in addition to his illegal status as further reason for his arrest.

ICE’s statement, however, was almost completely inaccurate to the point of malice. According to Joseph’s lawyers, he entered the country in 1999, left for a brief period in 2005 and re-entered under the same H-4 visa he originally applied for. They also explained the drug charge ICE referenced has been expunged meaning the rapper has no felony convictions. While they do acknowledge that he lost his legal status through no fault of his own when he was a child, they say he applied for a U-visa in 2017. The timing of Joseph’s arrest has some questioning ICE’s motives. The 26-year-old rapper has been here illegally for over 10 years, gained prominence and become a pillar of his community but wasn’t arrested until he rapped about the treatment of immigrant families. The larger response, though, has been surrounded around whether or not Joseph could be considered an Atlanta rapper.

What Does It Mean to Be Atlantan?

Rap fans quickly took to Twitter to voice their opinions. Most tweets were lighthearted and included some form of meme with Joseph’s face superimposed over British iconography, but some went as far as accusing the rapper of being a fraud and lying to fans. Late night host Trevor Noah’s own commentary went from hailing the rapper as “pure Atlanta hip-hop” to questioning if he was “faking it”. But how do you fake an upbringing? The response to Savage’s arrest, even by those who might have more progressive-leaning thoughts about immigrants in this country, is a harrowing example of how quick some can be to strip the title of “American” away from those who’ve considered this place home the majority of their lives.

Political implications aside, the response also calls into question ownership rights to hip-hop. Usually, because of how imbedded hip-hop culture is in Black culture, similar conversations arise when non-black artists start to gain prominence in the industry. A matter of legitimacy is often brought due to the fact that rap and hip-hop culture were born out of the black existence in America. But to all of a sudden put 21 Savage to the test is almost to question his blackness. Aside from the fact that Savage is not the only Atlanta based act not originally from Atlanta (names like Ciara, Gucci Mane, and Ludacris come to mind), being from the UK doesn’t change the fact that for 19 years he’s been living the black experience in America. In Atlanta, Georgia.

In the week since Joseph’s arrest, his absence from the spotlight has already taken a toll on his engagement with his community and the industry. Despite being nominated for Record of the Year and Best Rap/Sung Performance for his Post Malone collaboration, “Rockstar” at the Grammys this past Sunday, his co-manager Justin “Meezy” Williams tweeted out that the awards show refused to release the rapper’s tickets to his mother or team meaning no one was there to represent him or speak on his behalf if he’d won either award. Williams blames politics for the move and may not be wrong.

This isn’t the first time an artist hasn’t attended a show, and someone’s gone in their place. At this year’s event, Mac Miller’s parents were given their son’s tickets so they could represent the recently deceased rapper. So, despite what Joseph’s lawyers describe as “remarkable ties to the community” the rapper’s detention is already starting to impact his career which again, point to potentially threatening and slanted tactics by ICE. According to NYU and the Black Alliance for Just Immigration, Black immigrants make up 5.4 % of the unauthorized population in this country but account for 10.6 % percent of the removal proceedings between 2003 and 2015.

The #BlackLivesMatter movement and rapper Jay-Z have joined Savage’s cause, starting a petition demanding his release and hiring additional lawyers for his team. The conversation surrounding the rapper’s arrest is an important one. While it may spark debate about immigration reform in this country, it is also introspective on how we police what it means to be American or any of the other things we can identify as in the country. Life in America isn’t just one experience. There is no quintessential American, no average black person, no typical immigrant, and it’s about time we recognized that.